Here are ten of the best rally cars, from the original Mini Cooper to the high-tech Mitsubishi Evo 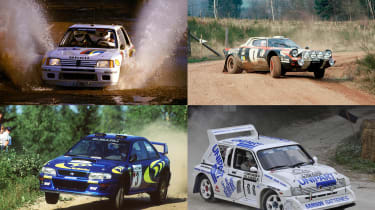 Rallying is one of the oldest forms of motorsport. Its origins date back to the Paris-Rouen horseless carriage competition held in 1894 and the Monte Carlo Rally of 1911 generally being cited as the earliest rallying event.

This makes it at least 40 years older than Formula 1 and while it may take a more committed sort of enthusiast to camp out in a forest to catch a fleeting glimpse of a fire-breathing Citroen than it would to attend a Formula 1 GP, the experience arguably remains more involving.

With most rally cars being loosely based on production models, the link – however tenuous in reality – is still there when enthusiast see the familiar outline of a Ford Focus jumping its way across the horizon. Here we focus on a selection of the best rally cars from the late post-war era up to the turn of the century.

They may not all have been the fastest or most successful on paper, but each car here left an indelible mark on the rallying world and they continue to evoke fond memories in generations of rallying enthusiasts to this day. 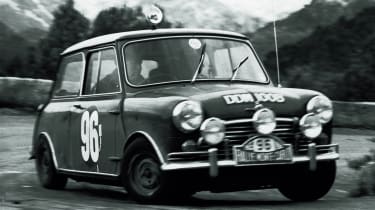 Not content with redefining the small car sector with its revolutionary drivetrain and chassis layout, the Austin Mini went on to challenge the top names in motorsport as well thanks to its low weight and excellent handling characteristics.

Regularly outpacing more powerful and cumbersome machinery on tighter rally circuits, it won the Monte Carlo Rally three times, and has been harassing period rally cars on historic events ever since. Quite the antithesis of today’s turbo monsters, it remains arguably the most successful small capacity front wheel drive rally car in history. 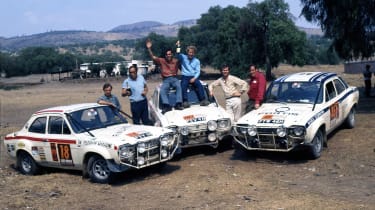 Fast Fords have been an indelible part of the Rallying landscape for decades but the one that started it all is the 1960s Escort RS1600. Based on the Escort Twin-Cam the RS cars featured uprated engines, strengthened body shells and competition suspension to stand up to the rigours of rallying.

Tail happy but well balanced handling make these cars crowd favourites at historic rallying events to this day. To capitalise on its early rallying successes a road going version named the Escort Mexico was built, with its crossflow 1.6 litre engine it became the precursor to the modern hot hatch. 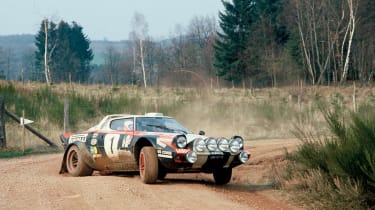 The Stratos was one of the last great rear wheel drive rally cars, before four-wheel drive redefined the game. With its stunning Bertone designed wedge shaped body and screaming Ferrari Dino-derived V6 it slipped and slid to three WRC manufacturers’ championship victories in 1974, 75 and 76.

Finding an original rally-spec Stratos today will probably cost as much as running a whole WRC team would have in the 70’s. An honourable mention must also go to the Lancia Rally 037 which was the last rear wheel drive car to win a WRC manufacturers championship in 1983, momentarily breaking Audi’s stranglehold on the event. 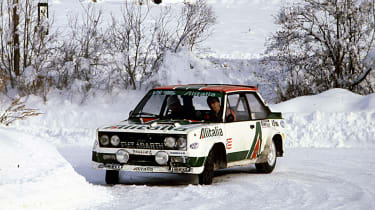 The Fiat 131 Abarth was in some ways the Italian version of the Ford Escort, a car that the man in the street could relate to, but with the necessary hardware to take on all comers. With overall championship wins in 1977, 78 and 80 this boxy-looking family saloon was a hard act to follow.

In truth it had little in common with the road-going versions, close to 300bhp and rally spec suspension was perhaps overkill for the school run anyway. Instead 400 road cars were built to meet homologation requirements, these cars received a similarly aggressive body kit and a 16-valve 140bhp engine, which was plenty for a car weighing less than a ton. 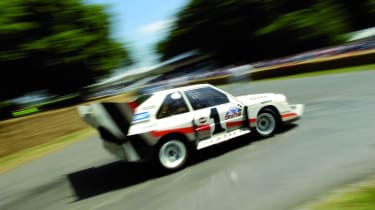 Bringing a gun to a knife fight tends to have predictable results, call in an airstrike as well and you get the automotive equivalent of what Audi did to the rallying competition in 1980. The knife in question was the Quattro S1, with four wheel drive an advanced gear changing system and a shortened chassis to enhance handling its superiority on slippery surfaces meant that the competition were left fishtailing in its wake. While it did not win the championship in its debut year due to inconsistent results the writing was on the wall and its layout was soon adopted by all the major competitors. 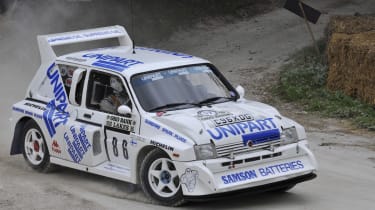 The WRC career of the MG Metro 6R4 rally car – which arrived in 1985 – proved to be short lived, early successes did not materialise into regular wins thanks to teething problems with the un-boosted 3.0-litre V6 engine, which depending on spec could produce up to 410bhp. By the time it became reliable the class for which it was built was abandoned.

It was massively quick however, and once the drivetrain problems were sorted the little Metro proved to be a potent rallycross weapon. That V6 engine in turbocharged form eventually went on to power the Jaguar XJ220 supercar. 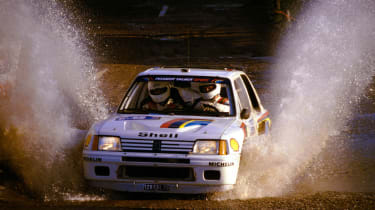 With a massive rear wing, four-wheel drive and a mid-mounted four-cylinder engine producing up to 450bhp, the Group B Peugeot 205 T16 was as far removed from your mum’s 1.4 205 as a fire cracker is from the Saturn V rocket. They had about the same gulf in performance too.

A WRC champ in 1985 and 86 it would have probably continued winning indefinitely had they not banned Group B racing for being too dangerous. Un-daunted, the 205 T16 continued to dominate the rallying scene in events such as the Paris-Dakar (as well as a couple of runs at the Pikes Peak Hill Climb) for the rest of the ‘80s. 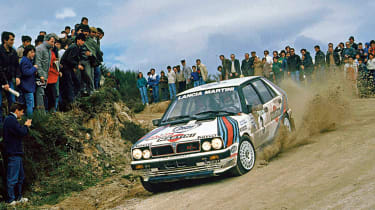 Another Lancia? Well what if we told you that this little car won the WRC championship six times in a row from 1987 to 1992 making the Lancia Delta the most successful WRC car of all time. Thought that would work. Introduced the year after Group B was banned, the four-wheel drive Lancia Delta proved to be the perfect rally car for the new formula putting its short wheelbase and powerful turbocharged engines to good use. Road going versions have become valuable collectors’ items. With a total of ten WRC manufacturers’ championships to its name, Lancia is the single most successful manufacturer to have participated in the sport. 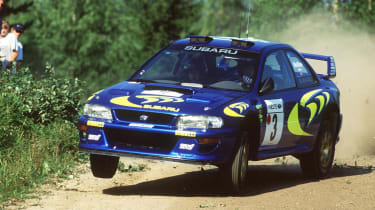 Picture in your mind’s eye a family sedan spearing down a dirt road with blue paintwork, gold wheels and a massive air scoop on top of the bonnet. We’re almost certain that it will be Richard Burns flying through the air in a mid-1990s Subaru Impreza. The Impreza, with its yellow logos and distinctive offbeat thrum, is one of the most memorable rally cars on the planet. Three manufacturers WRC titles between 1995 and 1997 with numerous podium finishes ensured that the Impreza has a permanent place in the rally car hall of fame. 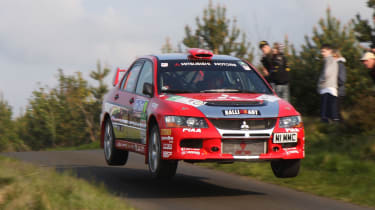 While the Subaru Impreza may have had the more memorable livery and still holds a special place in our hearts thanks to the incomparable Richard Burns’ skills behind the wheel, the Mitsubishi Lancer Evo is the car that history will remember as the more successful rally car.

Claiming four drivers title wins between 1996 and 1999 with Burns assisting to the 1998 season victory, as well as two manufacturers championships the Mitsubishi was another Japanese-built rally car that trounced its opposition in a commanding manner. Many rally inspired road versions were built and while WRC successes dried up after the 1999 season, the Lancer Evo continues to successfully campaign in various rallying disciplines. 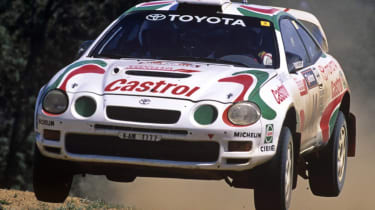 With manufacturers WRC titles in 1993, 94, and 99 the Celica GT4 was the first ultra-successful Japanese built car to dominate the event. Advanced four-wheel drive and technical reliability gave it the edge to come out on top.

So technically proficient were they that when Toyota were caught bypassing the newly introduced turbo restrictor rules, the FIA declared that they had never seen such precision engineering before banning them for the '95 and '96 seasons. WRC inspired limited edition models with uprated suspensions and bespoke body kits were made available during the early 90’s and remain potent track day weapons.