The Terios is an attractive package, with the right 'fun factor' and real off-road capability 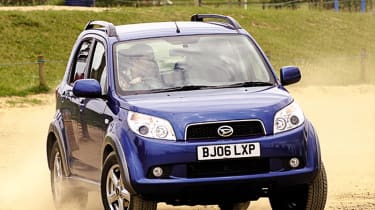 Driving: The 1.5-litre VVT engine is flexible, revving to 6,500rpom without sounding thrashy. It's smooth too, and only a quiet hum can be heard at motorway speeds. The permanent four-wheel-drive system saps power though, hurting the 0-60mph time. The five-speed gearbox is positive if a little sticky, and first and second gears are a little short, making driving in traffic a pain. In terms of handling, the Terios is surprisingly nimble. Admittedly, body roll is an issue, there's little steering feel and the ride is fidgety particularly on bumpy roads. But it corners well at lower speeds and is more fun than you might expect on twisting roads. And while it isn't a serious mud-plugger, the Terios does have genuine off-road ability. It lacks a low-range transmission, so step inclines are best avoided, but the little Daihatsu is capable of taking on deep ruts and thick mud with few problems.

Marketplace: It probably isn't the first name that springs to mind when you think off-roaders, but Daihatsu has been selling the Terios in the UK since 1997. This all-new car is much more sophisticated than the original though, drawing heavily from the old Toyota RAV4's underpinnings. This is possible because Toyota has owned its Japanese compatriot since 1999. It looks like a serious off-roader, with definite hints of RAV4, while the angled front headlights and chunky lines give it an aggressive appearance. It is still narrow, but the high waistline and short overhangs help balance this. Glaringly though, there's no diesel - the only engine option is the 1.5-litre petrol, offered in three trim levels. It's also five-door only. Rivals come from less traditional sources, such as the Fiat Sedici and Suzuki SX4 'crossover' SUVs. Unlike Daihatsu, those companies have given their models a more conventional, hatchback-derived look and feel on the road, at the expense of ultimate off-road ability.

Owning: The build quality of the Terios seems weak in places. The doors close with a hollow clank, while the bonnet flexes with even the slightest pressure. That aside, it still has a rugged charm - though the side-hinged tailgate, which also houses the spare wheel, can make access difficult in tight parking spaces. Thanks to the car's height, there is ample head and leg space for rear passengers. Elbow room is limited though, and with three adults in the back, it's fairly uncomfortable. Up front, the driving position is good and there is great all-round visibility, making the Terios an easy car to manoeuvre in traffic. The interior is well put together and the controls are easy to use, but the plastics on the dashboard and centre console are cheap to the touch. Toyota's parts bin has also been raided to complete the cabin, too. Servicing costs will be low, despite 9,000-mile intervals, and the unlimited-mileage three-year warranty is a boon. However, fuel economy is very poor; we averaged just 28.1mpg overall. 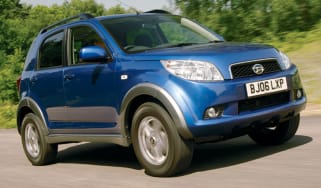 The Terios looks smart from all angles, with only a cheap spare wheel cover complete with a garish Eighties-style graphic spoiling things
Daihatsu Terios 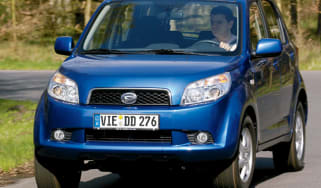 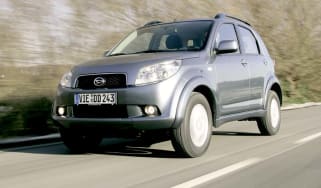 Popularity isn't something Daihatsu's Terios has enjoyed over the past few years. While the tiny 4x4 has found favour with an enthusiastic minority of…
Daihatsu Terios 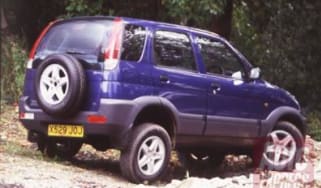 Why are growing numbers of motorists buying a 4x4 even if it spends most of its time on the drive? It's all about four-wheel-drive security and image …
Skip to HeaderSkip to Content