The Daihatsu Terios has grown up! We find out how the second-generation model shifted its rough and ready image 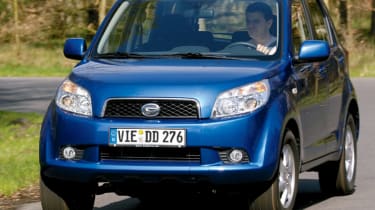 The new Terios addresses many of the weaknesses of the old model, chiefly by offering buyers more interior space. There's now ample room for five people and a good-sized boot, while the cabin is light and airy. A modern dashboard helps to give the car a modern feel, but the overall package is let down by the weak 1.5-litre petrol engine.

Although the previous-generation model of the Daihatsu Terios was a robust little workhorse with a small but enthusiastic customer base, its all-new replacement is bigger and more refined. And the Japanese firm hopes that it will double sales and can now move away from the rough and ready image of old.

The newcomer is certainly a massive leap forward in terms of style. Its chunky lines, flared wheelarches and choice of vibrant paint colours ensure that it is far more pleasing on the eye than its predecessor.

Indeed, from many angles thereis also a strong visual resemblance to the Toyota RAV4 - which, given that car's massive success, clearly hasn't come about merely by accident.

There's good news inside, too. While budget off-roaders traditionally suffer from a poor interior finish and limited cabin space, these aren't complaints you can make about the latest Terios. The dashboard isn't made from the finest materials available, but it is logically laid out and feels hard-wearing.

Five adults will fit comfortably, with only the tallest experiencing head and legroom problems. There's plenty of boot space, too, which really increases the mini mud-plugger's practicality. Yet take to the road and the car's main weakness is instantly exposed. The 1.5-litre petrol powerplant isn't particularly economical, it struggles to keep pace with faster traffic and really needs to be worked extremely hard if you're to eke out any performance at all. This means engine noise is a constant bugbear.

A glance at the figures backs this up. The sprint from 0-60mph takes the best part of 13 seconds, while maximum speed is reached at less than 100mph - a good indication of how little shove the new arrival has.

Daihatsu plans to introduce a diesel engine within two years - possibly Toyota's 1.4-litre D-4D unit - which should at least provide more pulling power and improved economy. Despite its elevated stance, the little Daihatsu drives well and its road-biased sus-pension provides agile handling andstable cornering. It can also cope off road, as long as the action is more gravel tracks and green lanes rather than steep or slippery terrain.

So although the Terios has its lim-itations, buyers will benefit from a fantastic view of the road, decent dynamics and a certain amount of rugged ability - and all for less than £13,000. That begins to make the Daihatsu look like a bit of a bargain.