Popularity isn't something Daihatsu's Terios has enjoyed over the past few years. While the tiny 4x4 has found favour with an enthusiastic minority of budget buyers, dull styling, poor cabin space and underpowered engines have ruined any chance of challenging trendy lifestyle off-roaders, such as the Toyota RAV4. 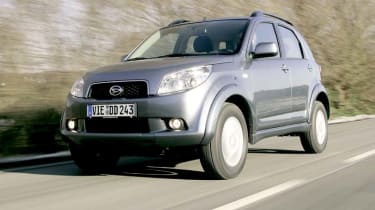 The old Terios was poorly built, noisy and cramped. Its replacement is the complete opposite. It offers space for five, a refined driving experience, better build quality and respectable levels of equipment. On the downside, the 1.5-litre engine lacks torque, and there are more dedicated off-roaders available - but none offers as much for such a low price.

Popularity isn't something Daihatsu's Terios has enjoyed over the past few years. While the tiny 4x4 has found favour with an enthusiastic minority of budget buyers, dull styling, poor cabin space and underpowered engines have ruined any chance of challenging trendy lifestyle off-roaders, such as the Toyota RAV4.

But if things go to plan for the Japanese manufacturer, the new model could turn things around. Bigger, better built and representing a step up-market, Daihatsu is so confident about the Terios' appeal that it's banking on as many as 4,000 sales a year - making the car the firm's most popular model since the Charade. Those numbers won't worry big-sellers such as Land Rover's Freelander, but if you're in the market for a low-cost off-roader for around £12,000 in March, it's a car that should be on your shopping list.

In line with Suzuki's new Grand Vitara, the Terios has addressed one of its predecessor's biggest problems: lack of space. Based on the platform of the outgoing RAV4, the model is 142mm longer and 160mm wider than before.

This means it's much bigger inside, with proper seating for five (the last Terios only had two rear chairs) and a decent boot. It looks more modern, too. The extra dimensions give the Daihatsu added road presence, and with big, bold headlights and a chunky wheel-at-each-corner stance, it's a confident design.

That's continued by the centre console, with its large, simple buttons, and the dash, which houses the speedo, rev counter and fuel gauges in three hooded pods. Equipment levels are acceptable, too, with electric windows and air-conditioning standard on most models. However, plastic quality still falls behind more expensive rivals.

Under the bonnet, Daihatsu has replaced its old 1.3-litre engine with a more powerful 105bhp 1.5-litre unit. Delivering only 140Nm of torque, it needs high revs to perform well, but at least it's smooth and spins freely.

In addition, there will be a 2.0-litre petrol. But it's the all-new 2.0 turbodiesel that should be the pick for UK buyers when the model goes on sale. All engines are hooked up to a five-speed manual gearbox.

On the move, the first thing to strike you about the Terios is that it's biased towards road use. The suspension is quite firm, and with widened front and rear tracks, the car feels agile yet stable even under hard cornering. But it still manages to offer a comfortable ride, and with good refinement it's much more relaxing than before.

Don't expect it to do much off-roading, though. With a transmission derived from the RAV4's and a central differential lock, the Terios can handle muddy tracks and green lanes, but big undulations will be a problem due to its relatively low ground clearance. Still, with standard stability control and all-wheel drive, it feels secure at all times.

The Terios certainly represents a vast improvement over its predecessor. We will have to wait for a full test on UK roads to see how much better it really is, but on the basis of this early meeting, Daihatsu deserves to do well.