The Terios looks smart from all angles, with only a cheap spare wheel cover complete with a garish Eighties-style graphic spoiling things 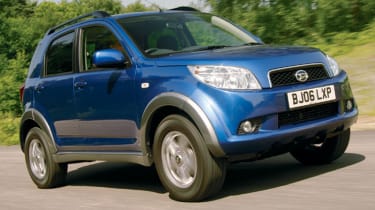 The all-new Terios has much more to offer than its predecessor. Few other new cars manage to blend genuine mud-plugging ability with chunky off-road styling for less than £14,500. However, the Daihatsu’s bumpy ride and sluggish performance will be too much for many buyers to accept. It’s a true baby off-roader, but what it lacks is a grown-up driving experience.

As the debate over congestion and air pollution rages, one type of car is getting more stick than any other: the 4x4. Criti­cised for being gas-guzzlers, off-roaders have had a tough time, but why?

Daihatsu’s Terios, for example, is little bigger than a supermini and has a frugal 1.5-litre engine. Could it provide 4x4 fans with their mud-plugging fix while still being friendly to the environment? We climbed aboard the first example to hit British soil to find out.

While the new Terios is bigger than its city car-sized predecessor, it’s still small enough to fit through tight gaps and into compact parking spaces in town. The Daihatsu’s minuscule proportions are emphasised by its tall height.

There’s no doubt the chunky styling is inspired by Toyota’s previous-generation RAV4, which has also donated many of its mechanical parts. The Terios looks smart from all angles, with only a cheap spare wheel cover complete with a garish Eighties-style graphic spoiling things.

Inside, function has dominated form. Many parts, including the gearstick and steering wheel, will be familiar to Toyota drivers, but the build quality is solid. A lack of reach adjustment on the steering and tiny door pockets hamper the cabin’s appeal, but there is a decent amount of space in the rear. It’s just a pity designers couldn’t fit a split tailgate into the package – the side-opening door limits practicality in tight spaces. What’s more, while the seatbacks fold and the squabs tumble, they don’t use all available space. You’re left with a tall, deep load bay which is great for a chest of drawers, but flawed when it comes to items such as mountain bikes.

Only one engine is available, and performance is pedestrian. With 103bhp, the 1.5-litre unit struggles to shift the Terios’s weight, with 0-62mph in 12.2 seconds. However, to match that figure you will need to use all the revs – peak power doesn’t arrive until 6,000rpm, while more importantly the maximum torque isn’t available until 4,400rpm. Once up to speed the Terios doesn’t offer a particularly comfortable ride. It bounces around on the road, giving the impression of being top heavy. Thank­fully, when pushed it proves remark­ably stable, with the strong brakes provi­ding even greater confidence.

Price is the Daihatsu’s trump card. At £14,295, our high-spec SX comes with full-time 4WD and a locking centre dif­ferential for when the going gets tough. Off-roaders might be scorned for their vast size, gutsy engines and opulent cabins, but all these features give them desirability – and that the Terios lacks.