Why are growing numbers of motorists buying a 4x4 even if it spends most of its time on the drive? It's all about four-wheel-drive security and image rather than mud-plugging ability 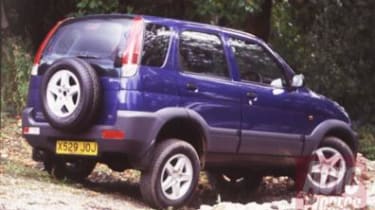 Witness the birth of the SUV: sport utility vehicles that are all show but little go off-road. And 'soft-roaders' don't come milder than Daihatsu's Terios, the 4x4 which thinks it's also an estate and a compact MPV. But is this jack-of-all-trades a master of any and what's it like used?

Driving How you rate the Terios depends on what you expect of it. With its meek 1.3-litre engine, simple 4x4 system and minimal ground clearance, it doesn't pretend to be a mountain climber.

The Daihatsu boasts car-like handling and, thanks to its short wheelbase, feels quite agile. However, the ride can be uncomfortable on uneven road surfaces.

While designed to replace the Sportrak, the Terios is less substantial on the road and not as accomplished off it. High-speed stability isn't great, the 4x4 lacks a high/low-ratio facility to get it out of trouble and the chassis isn't designed for mud-plugging. The original 1.3-litre engine provides acceptable performance in town, but is strained on the motorway, and is far from ideal for towing.

The Terios was improved considerably in 2000 when it got the Toyota Yaris's VVTi engine. This Daihatsu-designed unit cut the 0-60mph time to about 13 seconds and enhanced flexibility and refinement. Fuel economy improved, but don't expect more than 35mpg from either engine, and 30-32mpg with the auto box.

Living with There's ample room for four adults in comfort. Luggage space is limited, but a split-fold rear seat helps. Around town, the Terios is adequate, but the choppy, noisy ride spoils long journeys. If you avoid the base models, the Terios can feel civilised. The original Plus has ABS, air-con, power front windows and twin airbags.

The 2000 facelift saw the base E lose its central locking, so go for the EL or SL. Both have twin airbags and alloy wheels, while the SL boasts air-con, too. Initially a limited-edition model, the SE is the most lavish Terios.

Buying and owning If the car has only seen road use there should be little to worry about. Daihatsu mechanicals are normally robust. While it's cheap to buy, though, spares and repairs can prove otherwise, and specialists deal chiefly in Sportraks and Fourtraks. Insurance is pricey, too.

Most used examples are available at main dealerships and the approved plan is worth having. Those still under warranty get the cover topped-up by a year. Early models fall under the old scheme, which isn't as good on parts.

The high-sided Terios is neither an estate nor a compact MPV. But it's a budget alternative for those who want rather than need 4WD. The Daihatsu is best as an urban or rural runaround, where low speeds don't show its faults.