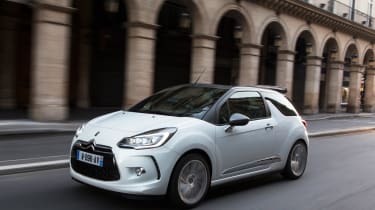 The DS 3 Cabrio’s design remains eye-catching and striking, with the engine updates making it more engaging than ever. It’s marketed as an alternative to traditional premium offerings, which in turn attracts a premium price tag. If you don’t need a soft-top, there’s a £2,345 saving to be had by opting for the hard-top, but the added style of the Cabrio means it’s the model we’d choose.

DS, Citroen’s luxury sub-brand, has decided to go it alone, and the facelifted DS 3 Cabrio – formerly the Citroen DS 3 Cabrio – is the first solo effort since the French manufacturer made DS a brand in its own right.

Although this updated car still wears Citroen’s chevron badge on the front grille, all DS models will be marked out with their own distinctive emblem next year. Until then, the new soft-top’s visual updates are restricted to a set of LED and xenon headlamps, while scrolling indicators and 3D-effect LEDs give it a concept-car look. 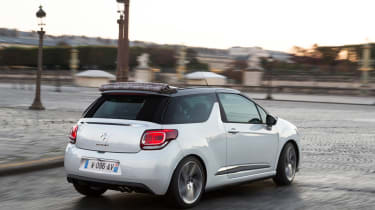 The focus here is on increasing performance and reducing running costs. Under the bonnet sits a new 165bhp 1.6-litre four-cylinder turbo, replacing the old 155bhp version. Engineers have upped the power with boosted injection pressure and reduced internal friction, but also improved efficiency by 18 per cent, with a claimed 50.4mpg. CO2 emissions also fall from 137g/km to 129g/km, dropping it down a tax band.

DS models have always been marketed as more luxurious and premium offerings compared to standard Citroens, and the new DS 3 Cabrio has a sprightly and playful character that deserves far more recognition than it gets.

The four-cylinder turbo engine has a real willingness to rev and provides respectable shove, with 240Nm of torque available from only 1,400rpm. The added punch has also shaved seven-tenths off the 0-62mph time – it now completes the sprint in a respectable 7.5 seconds. 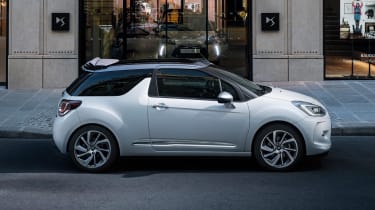 A six-speed manual gearbox comes as standard, but the throws between gears are long and delivered with an unrefined clunk. It’s nowhere near the sharp and snappy changes you get in a Ford Fiesta ST. Direct steering allows you to make the most of the car’s playful character, and even in wet conditions there’s plenty of grip from the pointy front end. The trade-off is a slightly compromised ride, but it strikes a nice balance between comfort and responsiveness.

Although badged as a cabriolet, the roof on the DS 3 is more like a panoramic rag-top. It can be opened and closed at speeds of up to 75mph and allows DS to keep the structural integrity of the car largely intact, adding only 25kg. The shark-fin B-pillar remains, as does the functional boot. The letterbox-style opening is narrow, so loading bulkier items is tricky, but 245 litres is a decent size all things considered.