The new DS 3 Crossback SUV has arrived in the UK, but is it a serious premium rival for the Audi Q2 and MINI Countryman? 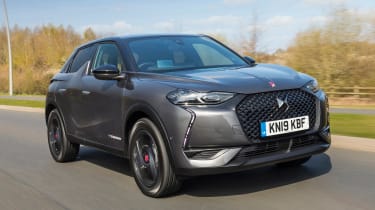 The DS 3 Crossback sits in a hugely competitive class, and it manages to acquit itself fairly well. The cool interior design, generous kit levels and the impressive ride and handling offer a genuine reason to consider one against an Audi Q2. The biggest challenge facing the DS 3 Crossback is whether or not buyers are ready to perceive the brand on Audi’s level, especially when some versions are more expensive to buy.

This is the DS 3 Crossback: the second SUV from PSA’s reinvented premium brand. It’s a big ask to waltz into the compact SUV class at the best of times, but with prices starting from £21,550, the Crossback is aiming straight at posher models like the Audi Q2 and the MINI Countryman. We found enough to like on the international launch, but does it hold the same appeal back in the UK?

The Crossback is the first PSA Group car to ride on the new Common Modular Platform (CMP), which will also underpin the upcoming Peugeot 208 and Vauxhall Corsa. CMP gives a nice rigid structure to work from, which is able to accommodate fancy in-car tech, Level 2 autonomous driving, and electrified powertrains.

First impressions show there’s plenty of smart touches to justify the high-end price point: the LED matrix headlights on top spec models look great, and the flush door handles pop out when the car is unlocked – automatically on keyless models. 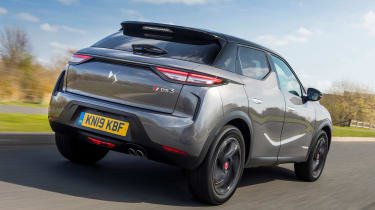 They open to reveal a cabin which looks like little else in this class. Regardless of which trim you go for – the car in these images is the second ‘lowest’ Performance Line model – the DS 3 makes the Q2 look rather ordinary. The Countryman has fewer hard, cheap plastics within reach on the lower parts of the door trims and dash, though.

Base models come with an eight-inch infotainment setup with standard Apple CarPlay and Android Auto, while Prestige models and above gain a 10-inch display. That’s comfortably larger than what you get in either the Audi or the MINI, but while it looks pretty, there’s a clunkiness to the user interface; the fact that you need to adjust the climate settings though the display is irritating.

This screen is backed up by a clear, large head-up display. But while the graphics are sharp, the large glass sheet it’s projected onto is incongruous. It’s like driving through a bi-focal windscreen. 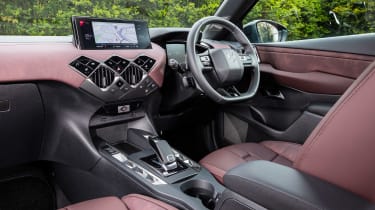 At 4,118mm long, the DS 3 Crossback is 118mm shorter than the MINI Countryman, so it isn’t fair to expect it to be as roomy. While headroom is fine, legroom isn’t great - there’s less than in a VW Polo, and it’s miles behind the T-Cross SUV. Boot space, at 350 litres, is more on a supermini level too. Still, those small external dimensions bring benefits when driving in urban areas.

And around town, the DS 3 impresses. It masks potholes impressively, with little more than a distant thud making its way into the cabin. It rides better than rivals, too: compared to the jiggly Q2 and irritatingly bouncy MINI, the DS 3 is a relaxing place to be.

Despite this, a sequence of corners doesn’t leave it flapping. Granted, the DS 3 doesn't feel as sharp as the MINI or the Audi, but grip is reasonable and it’s more resistant to body roll than the soft springs would have you believe. It’s not fun, though: the steering, and its weird, lazy self centreing action prevent that.

We also sampled the autonomous driving tech, which takes over the steering, throttle and braking control on clearly marked carriageways. It has some way to go to compete with the best systems in this area: the steering inputs to track within lanes tend to be twitchy, and braking for stationary traffic is a little last-minute.

From September, buyers will be able to get their hands on the DS 3 E-Tense. The electric powered model promises a circa-200 mile range on the WLTP cycle and 100kW rapid charging. Until then, the range is combustion-only: there’s a 99bhp 1.5-litre diesel and a 1.2-litre PureTech petrol offered in three flavours: 99bhp, 128bhp and, making its debut for the PSA group, a new 152bhp model driven here. 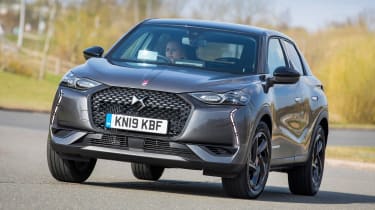 The new option is smooth and refined, but speed-wise it’s a little off the pace. On paper, it’s a second quicker to 62mph than the 128bhp model (8.2 versus 9.2 seconds) but in reality you’ll only see that benefit it you rev it right to the red line. It has only a modest 10Nm more than the lower power version, too, so the extra shove is rarely felt. We’d save £1,500 and go for the 128bhp model.

The entry-level petrol model comes with a six-speed manual gearbox, and it’s a shame it isn’t offered higher up the range. Unlike PSA boxes of old, it feels slick to use, and would save some cash for those who don’t need the auto.

And cash is an area where the DS might struggle – compared even with its premium rivals. Within the Q2 lineup, the 35 TFSI S line is the closest to this DS 3 Crossback Performance Line Pure Tech 155 in terms of performance. Based on a four-year PCP deal, each with a matching £4,000 deposit, the DS 3 Crossback costs £359 per month - £16 more than the Q2. While the DS is better equipped, the Audi has more space inside. And that’s before considering that well-established badge on its nose.