Is the latest lightweight Scuderia track-star the Ultimate Ferrari? We find out in our exclusive test. 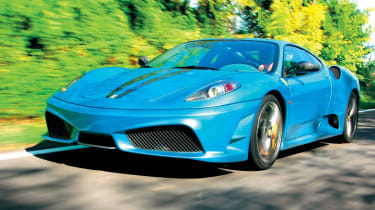 The latest track-tuned model from the Prancing Horse stable delivers ballistic performance and hardcore appeal for fans of the marque around the world. Ferrari UK has more than 300 people wanting one but, with only around 100 examples destined to reach these shores annually, they will have to be patient. For those fortunate enough to be able to afford one, the F430 Scuderia is definitely worth the wait.

It would be wrong to describe the Ferrari F430 Scuderia as little more than a lightened, sharpened version of the car on which it is based. Under­neath those meaner-looking aerodynamic enhancements lies a number of hugely significant changes.

Weight has been pared back, and at 1,350kg, the Scuderia is 100kg lighter than the standard F430. Power and torque outputs are up, too, with the 4.3-litre V8 producing an incredible 503bhp and 470Nm. The engine features new pistons and hand-polished intake manifolds, plus an exhaust sys­tem that breathes more freely and sounds absolutely fantastic.

Ferrari has also added its fastest-ever gearbox to the mix. The six-speed Superfast2 F1 paddleshift trans­mis­sion can swap ratios in only 60 milliseconds – that’s nearly as quickly as a Formula One racer. The result is a 0-62mph sprint of less than 3.6 seconds and a top speed of 199mph.

Yet for all its track enhancements, the Scuderia is devastatingly effective on the road. Key to its astonishing ability is Ferrari’s inclusion of the 599’s traction control system in the electronically controlled limited-slip differential, called E-Diff. The set-up’s four modes are linked to the stability and traction control, and their influence is managed by the dial on the steering wheel – just as in F1.

Leave the dial turned to Sport on the road, and the effect is mesmerising. The Scuderia’s power is matched perfectly to the available grip, regardless of how aggressively you drive it.

The Race setting provides a degree of slip at the rear, while CT off – a new option that disables the traction control but leaves the stability systems in place – reveals the Scuderia’s phenomenal chassis balance and user-friendliness. There’s the CST off mode, too, where everything is switched off – but that is best left for track superstars. And, as the suspension settings can be fine-tuned, the newcomer has astonishing cross-country pace.

The F430 Scuderia weighs in at a huge £172,500 – or about £50,000 more than the model it’s based on. But there’s a great deal more to this car than revised suspension and a slightly more powerful engine.

Unlike on the Porsche 911 GT3 or Lambor­ghini Superleggera, Ferrari has fitted carbon ceramic brakes as stan­dard. The cabin is stripped of carpets, while lightweight sports seats and carbon fibre keep the weight down. On the outside, the car gets 20-inch alloys and revised aerodynamics, and also rides 15mm lower, to provide better high-speed stability.

But is it worth the same sort of money as Ferrari’s 599 GTB Fiorano? The simple answer is yes. The Scuderia laps the Fiorano circuit quicker than an Enzo; think of it that way, and it starts to look like a bit of a bargain.Rival: Porsche 911 GT3 RS It's much cheaper and the Porsche runs the Ferrari very close indeed. But on the limit, it becomes clear the GT3 doesn’t benefit from the F1 technology seen on the Scuderia.

For an in-depth buyer's guide on the Ferrari F430 from Classic and Performance Car click here...