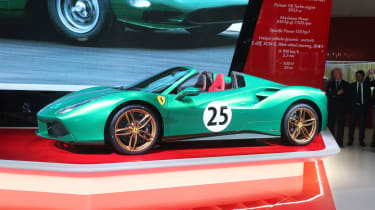 Ferrari is celebrating its 70th anniversary in style, and as part of the festivities it’s announced the launch of 70 ‘liveries’ for five of its cars. The paint and interior combinations are available via Ferrari’s Tailor Made programme, and evoke memories of some of the brand’s most iconic vehicles from the past. Ferrari has shown off four examples at the 2016 Paris Motor Show.

The first pays tribute to the most successful Grand Prix driver of all time – Michael Schumacher. Ferrari showed the livery on a 488 GTB, and it’s a nod to Schmacher’s 2003 F1 car, in red with white detailing. 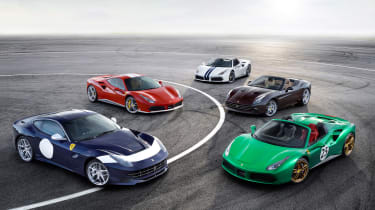 Another F1 star was honoured with ‘The Sterling’ model – a paint scheme reminiscent of Stirling Moss’ 250 GT Berlinetta. It’s displayed at Paris as an F12 Berlinetta painted a similar dark blue, with a white stripe across the bonnet and white roundels on the doors.

There’s no prizes for figuring out who’s Ferrari inspired the ‘Steve McQueen’ livery on the California T. With a brown paint scheme and tan leather interior, it’s decked out like the actor’s 1963 250 GT Berlinetta. 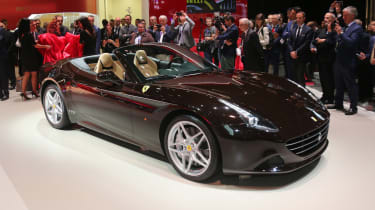 The final car Ferrari showed off was perhaps the most striking. It’s a 488 Spider in a livery called the ‘Green Jewel’ and is inspired by David Piper’s Ferrari 365 P2 back in 1965 and ’66. Gold wheels stand out against a bright green paint job with a large circular number display on the side.

Five Ferrari models were made available in 70 liveries each, meaning a total of 350 cars. All have already sold out, though – a testament to the power of the Ferrari brand.

What do you think of Ferrari's iconic racing liveries? Let us know in the comments below...

Welcome to our Paris Motor Show hub page. Scroll down for all our Paris content...
The ultimate Ferrari toy car collection