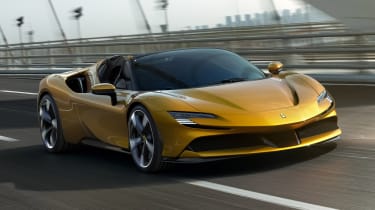 Ferrari has added a new flagship convertible mid-engined supercar to its line up in the form of a drop-top sibling for the SF90 Stradale: the SF90 Spider.

Like its coupe stablemate, it’s not a limited-run range topping hypercar akin to the LaFerrari Aperta but is described as a series production model and uses a plug-in hybrid drivetrain supporting all-electric running.

The powertrain remains unchanged from the fixed roof SF90 Stradale. A turbocharged 4.0-litre V8 petrol engine links up with a battery and electric motor setup to develop a maximum output of 986bhp and torque of 900Nm.

The SF90 Spider incorporates a lightweight folding hard top roof closely following the silhouette of the hard-top Stradale model. The canopy can be opened or closed in 14 seconds, while a new rear window can also be controlled by the driver. With the roof down, the mid-section of the car is defined by a new flat deck and two roll hoops supported by two new buttresses that flow down towards the engine compartment. An active spoiler sits at the rear, and can move up and down for more downforce or reduced drag. 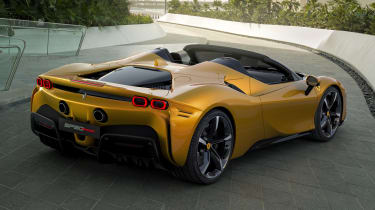 The addition of the retractable roof on the Spider means kerb weight creeps up by 100kg to 1,670kg, but baseline performance remains unchanged with 0-62mph taking just 2.5 seconds and top speed clocked at 211mph. 0-124mph takes just seven seconds.

The V8 engine sends its power to the rear axle via an eight-speed dual-clutch automatic gearbox with paddle shift controls mounted on the steering wheel. The front axle is driven by the 217bhp electric motor, making the Ferrari SF90 Spider an all-wheel-drive, hybrid convertible supercar.

The eManettino drive selector placed on the steering wheel unlocks the car’s various drive modes: eDrive, Hybrid, Performance and Qualify. A 7.9kWh battery provides an all-electric range of 15.5 miles so the SF90 Spider can be driven emissions free, relying on battery power only, with its speed limited to 84mph. Alternatively, the car’s hybrid drivetrain can assist the internal combustion engine. It can either send additional torque to the rear axle, or operate through a four-wheel-drive hybrid mode that introduces the electric front axle, also capable of instant torque vectoring for a traction boost when exiting corners.

As well as being capable of plug-in recharging, the SF90’s battery pack can recover energy through braking, or be replenished on the move by the 4.0-litre V8 engine. 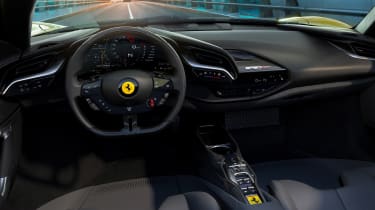 It’s also available with an optional pack for track driving. Called the Assetto Fiorano pack, it includes shock absorbers developed with aid from Ferrari’s GT racing department, weight saving to the tune of 21kg, thanks to the use of more carbon fibre and titanium components, and Michelin Pilot Sport Cup 2 tyres. Buyers who tick the Assetto Fiorano box can also have their SF90 Spider finished in a two-tone livery.

In the cabin, things go largely unchanged save for the introduction of two new aerodynamic fins intended to deflect air flow from driver and passenger while the roof is down. Other than that, it’s the same as the SF90 Stradale model, with a large 16-inch digital instrument cluster, the new gate-style gear selector panel, and a new-generation Ferrari steering wheel with touch-sensitive controls.

According to Ferrari marketing boss Enrico Galliera it will cost around ten per cent more than the SF90 Stradale. As such, expect an advance on the hard-top's price from £376,000 to roughly £415,000.

Has Ferrari mastered the hybrid supercar with the new SF90 Stradale?
Naran Automotive unveils its first hypercar: the Naran 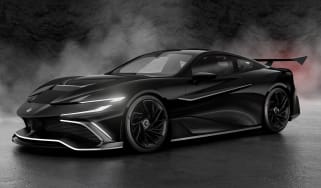 The Naran Automotive Naran is a 1,034bhp road-legal hypercar rival for the Aston Martin Vulcan and McLaren Speedtail