Easy to drive and fun in the right conditions, but lacks the refinement or dynamic ability of the best city cars

The Fiat 500 is very simple to drive, but that doesn't mean it's not enjoyable. Although no longer available from new, the engine that brings its fun personality to the fore is the two-cylinder turbo 875cc TwinAir unit, rumbling away under the bonnet with a characterful thrum when you rev it. It isn’t the most refined unit, vibrating away and sending shivers through the controls, but it is fun and has character.

The steering is light across the Fiat 500 range, while the handling is nimble and fun around town. The 500's ride is softer than the MINI, which means there is quite a bit of body roll in the corners. Since the 2015 facelift it’s become a lot less bouncy and rides with a bit more composure, but there’s limited feel from the steering still and it can’t match the ride comfort levels of a VW up!.

Don't go for the sunroof if you are a taller driver, as it impinges on headroom and the driving position is quite high. Combined with a slightly awkward clutch and notchy, imprecise gearbox, this means that the 500 is not as easy to get along with as a MINI. You’ll find its charms wear a little thin on fast road driving, but considering its town-dwelling focus, it’s adequate enough. 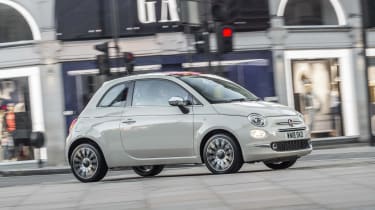 The 500’s engine range is about as diverse as you’ll find in a modern day city car. The range kicks off with a 68bhp 1.2-litre naturally-aspirated petrol engine, which manages 0-62mph in 12.9 seconds and a top speed of 99mph. It’s fine for town use and not too noisy, but the lack of power becomes pretty tiring at motorway speeds and when trying to overtake. It requires revving a bit to pull away smoothly due to a lack of torque, too.

The recently-discontinued 500 TwinAir two-cylinder turbo petrol engine used to be available in two power outputs - 84 or 104bhp - but it's only the former that's available as of 2019. Both engines give useful boost in torque and both are punchier than the 1.2 out of town, though. Refinement still isn’t great, however, as you’ve got that characterful two-stroke thrum vibrating the controls and making itself heard whether you want it to or not.

The 500 Mild Hybrid is powered by a new three-cylinder petrol engine that doesn’t follow the modern trend for turbocharging, creating an unusual combination of naturally aspirated power and electrified assistance. On the move, the three-cylinder engine requires plenty of revs to deliver its best and although it doesn’t feel quite as laboured as the old 1.2-litre, the new motor is not very refined.

The 500 was previously offered with a 1.3 Multijet diesel. With just 74bhp it didn't set the world alight, but it has plenty of torque providing greater flexibility and an effortless feel on the motorway. It's easy to tell it's a diesel under the bonnet at low speeds, but once up to speed it's smooth and relatively quiet. It's the Fiat 500's best engine if you plan on doing longer distances now and then, although low sales volumes mean it's harder to find on the used market than the petrol versions.