The Fiat 500L MPW is the largest member of the Fiat 500 family and the only one that is available with seven seats. 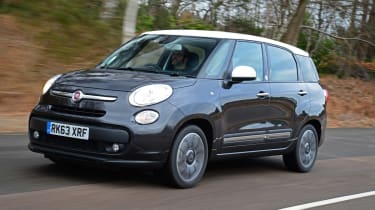 The Fiat 500L MPW – or multi purpose wagon – is the third bodystyle for Fiat’s compact people carrier, and follows on from the standard 500L and Trekking crossover.

Success for the MINI Countryman has proven that there’s a market for big family cars with loads of character. But is the Fiat 500L MPW a step too far?

The wheelbase stays the same as for the 500L, but there’s an extra 200mm behind the rear wheels, freeing up space for an optional third row (£700) and a 638-litre boot. However, the increased size does come at the expense of those retro looks.

The range mirrors the regular model – with power from Fiat’s line-up of efficient petrol and diesel engines – although Fiat charges a £900 premium for it, and the seven-seat layout is a £700 option on all but the 1.4 petrol, which is a strict five-seater.

The MPW is available with all of the frugal engines of the standard 500L, including the two-cylinder 900cc TwinAir engine.

The MPW is available with the same range of engines as the 500L, so from launch that means a 1.3-litre diesel, a 1.6-litre diesel and an 900cc TwinAir engine.

The 1.6-litre Multijet diesel is likely to be the most popular engine in the range. It’s got 104bhp and feels as though it has adequate performance. Engines with as little as 79bhp are available but they’ll probably feel very slow.

But we’re not as convinced by this 104bhp diesel engine. Yes, it’ll be cheap to run with 117g/km emissions and 62.8mpg, but it’s noisy and has to be worked hard. The new 118bhp version is a more relaxed choice.

The controls are all light and easy to use, so the 500L MPW is no more intimidating to drive than the city car that shares its name. It does feel a bit at sea in corners, though. Drive it sedately and the soft suspension does a fine job of soaking up potholes, but bigger rivals such as the Kia Carens and Citroen Grand C4 Picasso ride with even more finesse and are more refined, too.

The engines with the lowest running costs are the ones we’d most likely recommend you avoid.  The 1.3-litre diesel, for example, boasts 67.2mpg but will feel underpowered.

For the best blend of performance and low running costs go for the 1.6-litre Multijet, which feels relatively punchy and can also return 62.7mpg. The option of a 900cc TwinAir petrol engine is available, offering the best refinement of the lot and economy of 58.8mpg. In the real world, though, we’ve found it extremely difficult to even get close to that figure.

Fiat does allow you to add plenty of personalisation options – these include a contrasting roof and larger alloy wheels, as well as technology such as sat-nav, a reversing camera and climate control.

Although a predicted residual value of 38.1 per cent isn’t great, it’s better than the Kia Carens’ 36.4 per cent figure.

The 500L divides opinion with its styling, and the MPW isn’t going to do anything to change that. The standard 500L’s overall shape is reminiscent of the MINI Countryman, although the rounded lights and smooth front end help to set the newcomer apart.

The MPW adds another 20cm of bodywork to the rear end, but this makes it look tail-heavy when compared to the standard car. And while dark colours help to disguise the extra metalwork, the awkward rear, tall roof and upright windows mean the Fiat isn’t as neatly proportioned as the Kia Carens.

Although the exterior lacks cohesion, the Fiat’s interior is pretty stylish. The seats get neat two-tone fabrics with 500L branding, and the dash takes cues from the 500 city car. The cabin colours are toned down for the MPW, although the gloss black trim gives it a lift. We just wish some of the displays didn’t look as dated. The main culprit is the blocky orange LED trip computer between the dials – it looks old next to the Carens’ white-on-black display.

Elsewhere, the rotary climate controls are set low on the dash and angled down slightly, so they’re a bit tricky to use. And the quality of the switchgear isn’t up to the standard of the Kia’s, while there are more hard plastics on the doors and lower down on the centre console.

Thanks to its extra length, the 500L MPW serves up a 493-litre boot capacity in five-seat mode, and this is easily accessed thanks to the large, wide-opening tailgate. The low load lip helps matters, and there are two deep bins on either side of the boot for odds and ends. 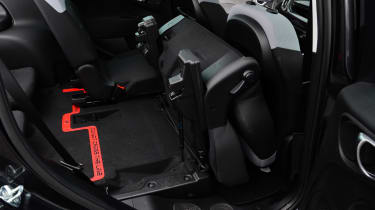 The rearmost row is a bit of a fiddle to use. You need to slide the middle row forwards to get the seatbacks up, although once in place, access is easier than in the Kia, as the middle row tumbles forward to create a wide entry.

When the middle row seats are back down, there’s not much legroom. Fiat advises that the back row is strictly for passengers less than five feet five inches tall, so only children and the petite will be comfortable. Even then, there’s a red dividing line on the floor that you have to keep your feet behind to stop the seats in front from trapping your toes. Headroom isn’t great, either, which is frustrating when the forward rows have plenty of space.

If you frequently carry seven people you'll pay extra - Fiat’s third row is a £700 option. If you stick with the five-seater, you get a vast 638-litre boot with the middle row of seats pushed forward – although there’s next to no legroom in this configuration.

The MPW uses an extended version of the 500L’s platform – itself a development of the Punto supermini’s chassis. While that means the underpinnings aren’t as new as the Kia’s, it’s a proven chassis, so reliability shouldn’t be an issue. The Multijet diesel has also been tried and tested across a wide range of Fiat and non-Fiat models, so again, any issues should be few and far between.

Fiat dealers don’t have the best reputation for customer service, though: they finished a lowly 28th out of 31 in our Driver Power 2013 survey – well behind 10th-placed Kia. The regular 500L has a five-star Euro NCAP crash test rating, and there’s no reason why the seven-seat MPW should do any worse. The rearmost row features two three-point belts, and the headrests are adjustable, too. 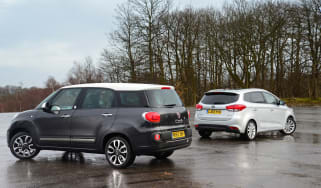 Fiat promises space and style with its new seven-seat 500L MPW. We see if it delivers against the Kia Carens
Fiat 500L Trekking Beats Edition 2014 review 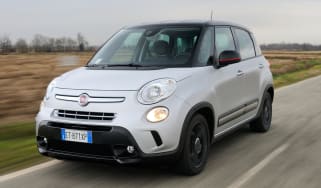 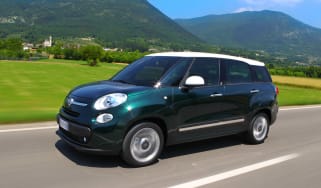