The efficient 500 Mild Hybrid offers all the usual supermini style, with useful fuel-savings and lower emissions

The 2015 facelift didn’t bring in any new engines, but incremental efficiency updates across the 500 range helped keep it competitive. The base 1.2-litre petrol manages up to 47.1mpg on the WLTP test and emits 136g/km of CO2, while those looking for further efficiencies and green credentials should look to the 500 Mild Hybrid, offering 53.3mpg and CO2 emissions from 119g/km.

The discontinued 500 0.9-litre TwinAir was available in two power outputs, but the switch to the WLTP test saw the more powerful 105 model dropped. On-paper efficiency improves over the 1.2 with combined fuel economy measured at 52.3mpg (74.2mpg under the NEDC tests) for the 85 and 67.3mpg for the 105. It's worth noting that in a number of tests with both TwinAir engines we’ve found a more realistic combined figure in normal driving is around 40mpg, so while the official figure is more realistic, it's still not realistic enough. 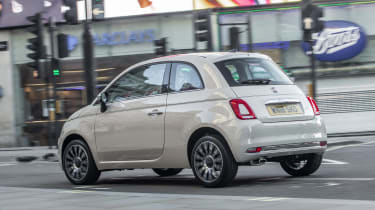 As you’d expect given its younger clientele, the 500’s insurance groups start off nice and low. The range begins at group 7 for the 1.2-litre Pop, in line with cars like the Citroen C1 and way behind the (admittedly more powerful) MINI hatchback. Even the highest-spec 500 goes no higher than group 9, although the older more powerful TwinAir 105 did reach group 15.

Most Fiats tend to struggle with miserly depreciation figures, and while the 500's initial desirability meant it initially bucked that trend, it's a fairly common sight on UK roads now. You'll find the 500 hatch holds on to around 34% of its value after 3 years and 36,000 miles, although the open-top 500C performs much better at 42% over the same period.