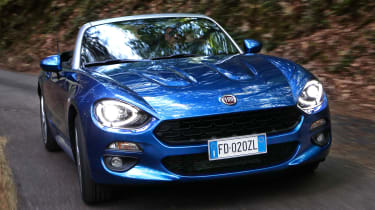 UK pricing for the new Fiat 124 Spider has been announced. The new two-seater sports car will start at £19,545, which is around £1,100 more than its Mazda MX-5 counterpart. Three trim levels will be available: Classica, Lusso and Lusso Plus.

All models will come with air-conditioning, keyless start, cruise control, an infotainment system with USB and Bluetooth connectivity and 16-inch alloy wheels as standard. Mid-range Lusso trim, priced at £22,295, will throw in a seven-inch touchscreen infotainment system - a £500 option on base Classico spec - along with sat-nav, a reversing camera, heated leather seats and keyless entry. The lavish Lusso Plus, priced at £23,295, adds automatic LED headlights and a BOSE stereo system.

A 124 Spider Anniversary Edition was designed to commemorate the 50th anniversary of the unveiling of the original roadster in 1966, and cost from £23,295, but it has already sold out. 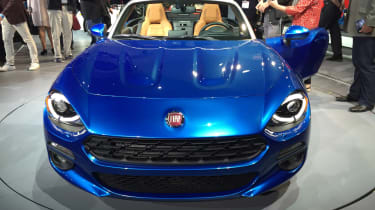 The first time we saw the 124 Spider in the flesh was at the 2015 LA Motor Show. The Mazda MX-5-based 124 was confirmed by Fiat CEO Sergio Marchionne earlier this year, after our exclusive story revealed the firm's plans.

The most noticeable feature is the front-end, with a significantly longer bonnet than the fourth-gen Mazda MX-5 on which it is based. With similar proportions to a BMW Z4, the 124 gets a jutting jawline, hexagonal grille and caved-in LED headlamps, while at the side you can clearly see the MX-5 underpinnings.

The rear end is completely different to the Japanese roadster, too, with hints of the old Dodge Viper in the design. Fiat says it is defined by two main features: the 'seagull' wings that fall inwards towards the bootlid, and a sharp horizontal tail lamps, which echo those on the new Fiat 500 supermini. You'll also find a small spoiler and twin exhausts – both hinting at the car's sporting potential. We expect the forthcoming Abarth version (confirmed by Auto Express earlier this year) to look even more racy. 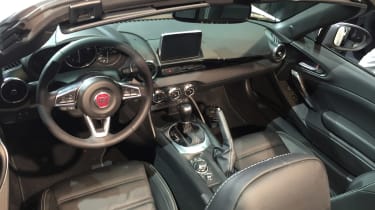 Moving inside and the cabin is very similar to the Mazda. Every dial, switch and knob is identical to those you’ll find in the MX-5, with the same seven-inch colour display on the dash controlled by the swivel wheel on the centre console. Like the MX-5, the 124's roof is operated by hand, with no electric option.

Fiat will ditch Mazda’s naturally-aspirated 1.5 and 2.0-litre engines for its own 1.4-litre turbocharged MultiAir petrol engine from the 500 Abarth. With 138bhp and 240Nm of torque it's liekly to be faster than the MX-5, and a more powerful 160bhp version will be offered in the US, though there's no word yet on whether this will come to the UK. All British cars come with a six-speed manual transmission. 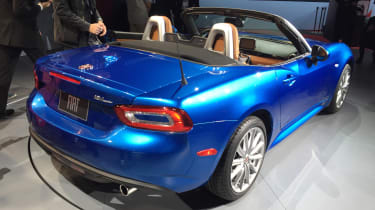 Standard equipment will include Bluetooth, USB connectivity and a six-speaker stereo, while an enhanced setup features a seven-inch touchscreen sat-nav, DAB and a reversing camera. Upgrades include a nine-speaker Bose stereo. 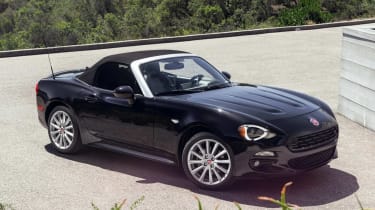 As part of the joint venture agreement with Mazda, both the Fiat 124 Spider and the Mazda MX-5 are to be made at Mazda’s factory in Hiroshima, Japan. The agreement between Fiat and Mazda was that the MX-5 will launch first and take centre stage in 2015, with Fiat’s alternative offering coming 12 months later in 2016 - that means we should see the Fiat launch in summer next year.

Being based on the MX-5, the new Fiat Spider will, of course, share certain key components such as the wheelbase and lightweight chassis with its Mazda stablemate.

This means the new roadster will weigh in at less than 1,000kg, while for the Abarth version the 1.4-litre engine could be tuned to “200[bhp] without issue”. On top of the additional power, expect the Abarth to get stiffer suspension, more aggressive styling and bigger brakes.

Given that the basic MX-5 has just 129bhp and does 0-62mph in 8.9 seconds, a 200bhp-plus version could offer genuine Porsche Boxster-rivalling performance. 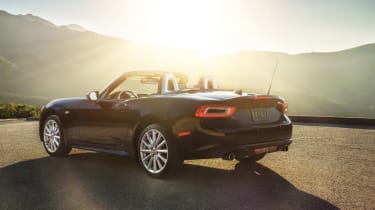 Our source also hinted that a lightweight, more affordable, Caterham 160-style model could be on the cards. This would have steel wheels and a “mechanically sensible” powertrain. It would be stripped of anything non-essential, though, with a focus on back-to-basics, rear-wheel-drive handling.

Prices and specs will be confirmed nearer the time, but given the predicted power increases over the MX-5, we envisage a starting price of just over £20,000.

For more on the Fiat 124 Spider visit our sister site Carbuyer.