Staff at Ford’s Bridgend plant, working on the Jaguar AJ-V8 production line, have been told to take a week off 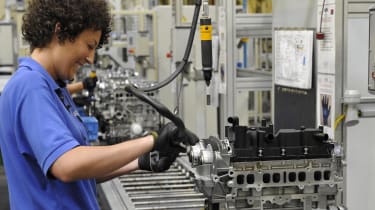 Ford has closed one of the production lines at its engine plant in Bridgend for five days, telling staff to take the week off.

The factory’s AJ assembly line – which produces the AJ-V8 engine for Jaguar – shut down from October 29, and will reopen on November 2.

According to a letter from Ford HR obtained by WalesOnline, the closure is a “knock-on effect” of Jaguar Land Rover temporarily suspending production at its plants, resulting in a “reduced demand for the component parts from their supply base” including Bridgend.

The letter says during the closure period “AJ production will cease and only activities that have business criticality or cost reduction opportunities will be undertaken”.

It also states that staff must be “willing to perform work as and when required either in his normal job or any other suitable job allocated to him” if they wish to be eligible for lay off pay.

Reportedly, “dozens” of employees at the factory have been told not to come into work this week and there is concern amongst them that this closure could be a precursor to job cuts.

A spokeswoman for Ford confirmed the closure to WalesOnline, explaining: “We have initiated five days downtime on one of our production lines at Bridgend Engine Plant from Monday, October 29. The production line builds engines for a third party.”

There has been no word from Ford on whether there will be more temporary production line closures in the future, nor has the manufacturer explained if job cuts can be expected. It’s also unknown exactly how many of the plant’s 1,500 employees are affected by this week’s AJ assembly line shutdown.

Do you think this is another worrying sign for the British car industry? Let us know what you think in the comments below...