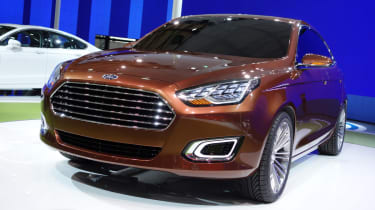 This is the Ford Escort Concept, which heralds the return of Ford’s most recognisable badge.

Seeking a decent dose of European kudos for its new, mid-size car, Ford of China decided to resurrect the Escort name for its Shanghai Motor Show concept.

The Escort previews a new mid-sized saloon that will slot into Ford’s Chinese range alongside the Focus, but above the previous-generation Focus sold in China as the Focus Classic.

While the current Focus is designed to offer a decent driving experience and plenty of tech – and is currently the best-selling car in China – the new Escort is intended to offer more space, particularly for buyers who prefer to be chauffeured, rather than drive themselves.

Although designed for the Chinese market, the Escort bears familiar hallmarks of Ford’s current global form language established by the Evos concept of 2011.

However, concessions to the Chinese market include jewelled headlights that are designed to resemble a figure of eight, which is considered lucky in China.

The big question though is whether the new Escort could ever be sold in the UK. “It’s a concept that certainly has global potential,” Craig Von Essen, communications director for Ford Asia Pacific told us. “But don’t get your hopes up, it’s been designed with China in mind. Small saloons are a much smaller market in the UK, so gaining a per cent here or there in sales isn’t really a big deal.”

In addition Ford plans to have five factories fully operational by that year, allowing the firm to build over a millions cars per year in China alone.

Production of the original Escort began in the UK in 1967, with the first cars hitting the road the following year. After becoming a near-permanent fixture in the top 10 best-selling cars in the UK for most of its life, the Escort finally bowed out in 2000, with over five million Escorts built in Halewood, Merseyside, and many more constructed at Ford’s plant in Cologne, Germany.

In contrast, the mid-size car segment accounts for around a quarter of all Chinese car sales, which represents a volume of around 5.5-million units per year, or around the same as total car sales in Germany and the UK combined.