Ford announces limited edition of new GT supercar that harks back to Le Mans win, and will go into production for first year 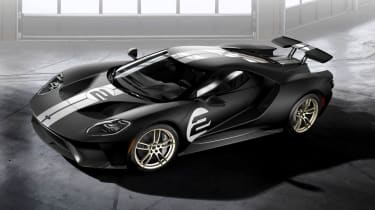 Ford’s hotly anticipated new GT supercar has already convinced 6,500 people to put down deposits. However, it looks like an even more special variant will be made available for the first year of production: the '66 Heritage Edition.

As you may have already guessed, it’s been built to pay tribute to the 1966 Le Mans winning Ford GT40 Mk2 car, borrowing the well-known livery of (gloss or matte) shadow black with silver stripes and graphics from the number two car. Along with the unique paint job, the ’66 Heritage Edition also comes with 20-inch forged aluminium wheels, finished in a satin gold clearcoat. These wheels complete the exterior changes that are said to provide a “modern interpretation” of that iconic racer. 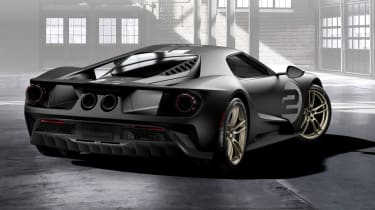 Ford has also made some interior modifications that help the ’66 Heritage Edition stand out from the regular Ford GT. Chief among these changes are the seats; the carbon fibre ones used in the standard GT are covered in ebony leather and feature pillowed inserts and unique stitching. Ebony leather also appears on the instrument panel, windscreen pillars and the headliner of the cabin.

Gold accents are present in the X-braces in the seats, the shift paddles and the instrument panel. Notable throwbacks to the 1966 Le Mans winner include the leather wrapped steering wheel and seatbelts which have a unique blue webbing effect. 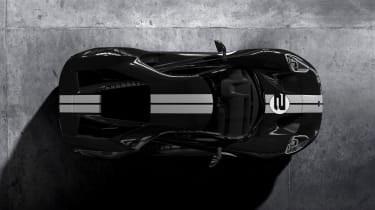 A Ford spokesperson has told us that the limited edition will be available in all markets, including the UK, and will only be built for the 2017 model year of production.

What do you think of this very special Ford GT? Let us know in the comments...