New Fiesta ECOnetic is the most efficient Ford ever built. But is it worth the premium? 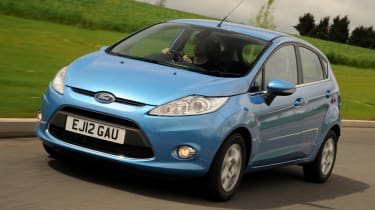 The Fiesta ECOnetic has always been one of our favourite green superminis as it’s great fun to drive, looks good and feels upmarket. The latest tweaks make it cleaner than ever, but it’s still trumped by the cheaper and cleaner Hyundai i20 Blue. The Fiesta is an excellent choice, but you need to decide whether you’re looking for the best to drive or the best value.

Advertisement - Article continues below
Ford has updated its ultra-efficient Fiesta ECOnetic, bringing CO2 emissions down to 87g/km and pushing fuel economy up to an incredible 85.6mpg in the process.
Those figures leave the old ECOnetic looking way off the pace with its 95g/km and 78.5mpg, but still fall short of the cleanest combustion-engined car on sale – the 84g/km Hyundai i20 Blue.
The improved eco performance is mainly due to the introduction of a stop-start system, although longer gear ratios also play their part, as does Ford’s focus on ensuring the components, like the cooling fan, sap less energy.
From behind the wheel, you won’t notice these tweaks at all. The 1.6-litre TDCi diesel engine takes the ECOnetic from 0-62mph in 12.9 seconds – in real world driving, there aren’t too many situations where you need to travel much faster than this.
It’s still not the last word in refinement, though, and the whole car tends to rattle when accelerating hard. But drive normally – as we did on our 100-mile test route of A-roads, motorways and city streets – and it will return just over 60mpg, so you can put up with these flaws. Plus, the stop-start system cuts in seamlessly, so you won’t be immediately reaching for the button on the dash to turn it off.
Advertisement - Article continues below
Advertisement
Advertisement - Article continues below

As we now expect from the Fiesta, the handling is pin-sharp, with the ECOnetic feeling agile even on its standard low-rolling-resistance tyres. The steering is well weighted and responsive, and more engaging than in the Fiesta’s supermini rivals.
The green Ford rides 10mm lower than the standard at the front and 8mm lower at the rear. This should hamper ride quality, but it feels incredibly supple. The standard fit 14-inch alloys have generous side walls that ensure rough roads don’t send large vibrations through the interior.
Inside, the ECOnetic feels as solidly built and well equipped as any other Fiesta. The dashboard is finished in a pleasing soft-touch plastic and our Zetec model had electric windows, a Quickclear windscreen and air-conditioning. Titanium versions of the ECOnetic are also offered, and come with DAB radio, tinted glass and automatic air-con.
But the Fiesta is already an expensive choice and if you start adding optional extras, a Titanium ECOnetic can cost over £18,000 – way too much for a car this size. Our model starts at a much more reasonable £15,595, but even this looks pricey when you consider that the Hyundai i20 Blue costs from £11,795 – and it’s almost as capable.
Advertisement
Share this on TwitterShare this on FacebookEmail
Advertisement