Mondeo-inspired Mk4 Ford Fiesta is a blast to drive, but now shows its age 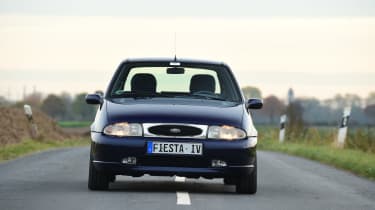 By 1995, when the fourth-generation Fiesta hit the road, Ford had reinvented itself as a maker of cars for keen drivers. The original Mondeo family model set the template in 1993, and the lessons learned were filtered down to the supermini two years later.

The Mk4 was based on its predecessor, but big changes to the suspension, body stiffness and engine line-up meant that despite the visual similarities to the old car, the two were worlds apart on the road.

At the heart of the Fiesta’s transformation from dowdy to dynamic was the adoption of the hi-tech Sigma (badged Zetec) family of engines. Featuring twin camshafts and 16 valves, these units were far more advanced than the old car’s CVH and pushrod HCS engines – although the latter soldiered on in entry-level models. Available in either 1.25, 1.4 or 1.6-litre guises, the smooth and eager Sigma engine is still in use today.

The car in our pictures had the smallest and arguably sweetest version. With less than 1,000kg to pull, the eager 74bhp four-cylinder accelerates with almost hot hatch eagerness. Better still, it’s matched to a slick five-speed manual gearbox.

Turn into a corner and you’ll discover the tweaks resulted in agile and engaging handling. Even compared with current small cars, the Mk4 feels nimble and inspires confidence. String together a series of bends and you find yourself grinning as you revel in the quick steering and flow of feedback from the controls. Yet this agility comes with a supple ride and decent refinement.

Look past the driving dynamics, though, and the car’s 20-year-old design shows. The interior is reasonably well laid out, but the fake wood trim of our Ghia version is a little garish. It’s the lack of space that really ages this Fiesta, however, particularly in the rear. Even for its day the Mk4 was cramped.

A facelift in 1999 freshened the car up, yet while it still set the standard for driving fun, rivals were edging ahead on space, kit and desirability. Even so, if you can find a good Mk4 few other cars will provide as many smiles per mile for so little cash.

Fiesta Fact: Under the skin, the big news for the Mk4 Fiesta was the adoption of sophisticated Sigma engines, developed in partnership with Japanese manufacturer Yamaha. Big-car kit – such as a passenger airbag and air-conditioning – was also made available for the first time.