Is turbo petrol engine the perfect partner for all-new family hatch? We hit the road to find out 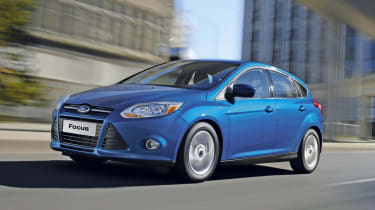 The 148bhp 1.6 turbocharged EcoBoost petrol engine is impressively versatile. It’s wonderfully quiet, economical and, due to its low emissions, means competitive tax bills. But it’s also punchy and a lot of fun to use. It suits the new MkIII Focus right down to the ground, working well with the grown-up yet enjoyable driving experience. Other than the small boot, the biggest negative is the rather high price tag.

Advertisement - Article continues below
Could this be the sweet spot of the new Ford Focus range? In the past month, we’ve driven flagship diesel and petrol models, as well as a mid-spec oil-burner – but none has scored full marks.
Now, it’s the turn of the 148bhp 1.6-litre turbocharged Titanium model. With the same EcoBoost petrol engine as the C-MAX MPV, it should be good to drive and cheap to run. So, is it the best of the bunch?
Video: watch CarBuyer's video review of the Ford Focus
[[{"type":"media","view_mode":"content_narrow","fid":"68652","attributes":{"alt":"","class":"media-image"}}]]
As with the more powerful 178bhp 2.0-litre version, it’s amazingly refined. Push the Power Button starter and the direct-injection unit settles to a quiet idle. Pull away, and it’s clear from the light clutch, precise six-speed gearchange and ample low-down shove that this is a very easy car to drive around town. Out on the open road, the Focus really starts to show how much fun it is.
Ford quotes a 0-62mph sprint time of 8.6 seconds, and it certainly feels very sprightly, with the slick gearchange helping to keep the engine on the boil.
Advertisement - Article continues below
Advertisement
Advertisement - Article continues below

Not that this is a hard thing to do. With a healthy 240Nm of torque, the Focus is extremely responsive. It’s not often you have to drop to third to overtake on a country road, while a well judged sixth gear results in a quiet and relaxing motorway experience.
While some buyers might be expecting more of the traditional turbocharged ‘rush’, the biggest compliment you can pay this latest EcoBoost unit is that it feels like a larger engine, such is the smoothness with which power builds through the rev range. It also sounds good, with a neat growl under hard acceleration, which fades away when cruising. The powerplant’s relatively small capacity and standard stop-start system mean fuel economy is very impressive – Ford claims 47.1mpg combined. Emissions are relatively low, at 139g/km, which results in annual road tax of £110 – although the EcoBoost is trounced by the 1.6-litre diesel, which puts out only 109g/km for a miserly £20 yearly burden.
Sitting on standard 16-inch alloy wheels, this Focus rides comfortably, soaking up bumps with ease. The suspension is still taut, though, and together with wider tracks and a clever torque vectoring system, the car offers plenty of grip, agility and traction.
Advertisement - Article continues below
A new electric power-steering system doesn’t provide the same great feedback as previous cars, but doesn’t suffer from the same kickback, either, and it’s still the best set-up in the class. As with the engine, the handling has a grown-up feel – although it’s fun when you want it to be.
Advertisement
Advertisement - Article continues below
We’re less sure about the styling. The shape isn’t as easy on the eye as the smaller Fiesta.
The triangular air intakes at the front are odd, while the enormous rear lights are a little awkward. Inside, however, there are more positives. There’s lots of space up front, and decent room for tall adults in the back.
The only fly in the ointment when it comes to packaging is the boot. At 316 litres, its capacity is smaller than that of the Vauxhall Astra and VW Golf.
Quality is first rate, with some classy piano-black plastic for the centre console. There’s also an impressive tally of standard kit, comprising sports seats, a heated windscreen, cruise control with a speed limiter, climate control and a Sony stereo that accepts iPods and other MP3 players. You also get ambient lighting, which bathes the cabin in a soft glow at night.
If that’s not enough, the range of options on offer wouldn’t look out of place on a flagship luxury saloon. This includes lane-keep assistance – which automatically steers you back into your lane on a motorway if you don’t indicate.
In addition, there’s a system that recognises road signs and displays them on the dashboard, an automatic parking set-up and a blindspot warning. However, these options can inflate the price somewhat. Even without any extras, this variant – which is available to order only in Titanium trim – weighs in at nearly £20,000. And while the 148bhp 1.6 EcoBoost is the best engine we’ve tried so far in the new Focus, the price tag is still a little difficult to swallow.
Advertisement
Share this on TwitterShare this on FacebookEmail
Advertisement