Does the fastest Ford Focus ever shoot straight to the top of the class? 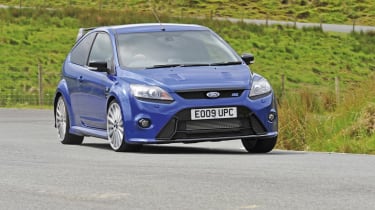 4
Buy used for less at Buyacar
The Focus RS has been around for a few months, yet it still has jaw-dropping visual impact. With its big spoilers, gaping grille and vast 19-inch alloy wheels, the Ford clearly signals its high-performance potential.
Look closer and you’ll spot the neat bonnet vents, blue RS badges and huge twin tailpipes. The Mitsubishi and Subaru blend into the background when parked alongside the RS.
So it’s a pity more effort wasn’t made inside. Apart from a pair of body-hugging Recaro seats up front and a smattering of fake carbon fibre, the layout is carried over unchanged from the Focus ST.
Still, that means a solid finish, plus plenty of space, with room for five adults. Access to the rear seats isn’t as easy as in the other cars, as the RS comes only as a three-door. But this doesn’t affect load carrying ability – fold the rear seats, and the 385-litre boot stretches to 1,247 litres.
It’s fair to say buyers of this type of car are more interested in performance than practicality – and the Focus doesn’t disappoint. Keyless go is standard, and when you hit the starter button, the 2.5-litre five-cylinder turbo burbles into life. It delivers 301bhp to the front wheels – that’s not as much power as its rivals here, and the Ford doesn’t have the traction of the two 4WD Japanese cars. But its lower kerbweight compensates.

We weren’t surprised to see the RS trail in the sprint from 0-60mph – it was more than a second slower, with a time of 6.2 seconds. Yet the weight advantage tells on the move, as the Ford provides explosive in-gear acceleration. Peak torque of 440Nm is at 2,250rpm, and the RS needed 7.2 seconds to get from 50-70mph in sixth – that’s only two-tenths longer than the more powerful Evo X.
In the real world, the Focus’s pace is blistering, while the off-beat growl of its five-cylinder engine adds to the drama. It’s not perfect, though. With so much power being directed to the front wheels, torque steer can be an issue – particularly on bumpy surfaces and in the wet – even though the car has Ford’s clever RevoKnuckle suspension set-up.
This is our only criticism of the excellent chassis, though. Grip is incredible through fast turns, while the limited slip differential boosts traction out of slower bends. The steering offers plenty of feedback to help you make the most of the car’s agility, the gearshift is quick and positive, and the brakes are powerful.
Most impressive of all is its price. At £26,395, the RS is a huge £9,604 cheaper than the Evo X. Even if you add sat-nav, xenons and Bluetooth options, you’ll make a big saving. This great value combines with the eye-catching looks, pace and thrills to help the Focus set a tough benchmark.