With the promise of style and practicality, we've already been impressed by Ford's new Galaxy - but that was in flagship form. Most family buyers will want to spend rather less than the £23,995 commanded by the 143bhp 2.0-litre TDCi Ghia-trimmed model - which is why we've now taken the wheel of the 123bhp 1.8 TDCi LX. 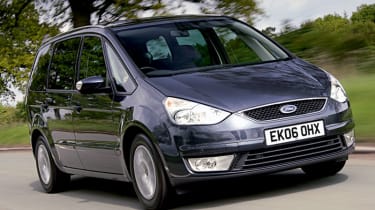 There's no doubt about it; the Galaxy is by far the most flexible and spacious MPV in its class. Although the old problems of a large tailgate and lack of sliding side doors remain, the newcomer is great to drive and comes with plenty of kit, even in entry-level LX form. What's more, the new 123bhp 1.8-litre diesel offers a decent compromise between performance and economy.

With the promise of style and practicality, we've already been impressed by Ford's new Galaxy - but that was in flagship form. Most family buyers will want to spend rather less than the £23,995 commanded by the 143bhp 2.0-litre TDCi Ghia-trimmed model - which is why we've now taken the wheel of the 123bhp 1.8 TDCi LX.

It's not as well equipped or powerful, but for those who put space and flexibility above all else, will the £20,295 price make the LX the pick of the range? Despite being the entry-level trim, this is no bargain-basement effort. There are no alloys or rear electric windows, but you get air-con, a heated windscreen plus curtain airbags as standard.

Most importantly, though, the LX has Ford's clever FoldFlatSystem (FFS), which allows all the rear chairs to fold quickly with two pulls of a lever. Unlike its predecessor, there's no struggling to remove heavy seats, and a level load space of 2,325 litres is the result.

This falls to 308 litres in seven-chair mode, but that's still impressive considering the arrangement's flexibility. Not only does the middle row slide to maximise legroom, but the third row does, too, giving even tall adults ample space. They'll get a good view as well; thanks to raised theatre-style seating and a big side glass area, the Galaxy is a comfortable place in which to spend time.

It's also solidly built, with quality chrome dash trim, tactile plastics and classy colour combinations. Downsides? As with its predecessor, access can be tricky in tight spots, due to a large tail-gate and the lack of sliding side doors.

But unlike the old model, the new Galaxy is great to drive. Thin A-pillars mean visibility is very good, while accurate, well weighted steering and a smooth ride make it both easy and fun to take along country roads - and it is just as happy on the motorway.

There's no getting away from the five-metre-long bulk when parking, but the diesel motor certainly doesn't feel strained by the car's size. The 0-60mph sprint is completed in 11.4 seconds, and a healthy 320Nm of torque results in decent in-gear acceleration. It's also economical, returning around 45mpg.

Occupying a neat middle ground - slightly pricier than the 99bhp entry-level diesel model, but much cheaper than the higher trims - the 123bhp 1.8 TDCi LX delivers a strong blend of kit, performance and economy.