The Galaxy's blend of car-like handling, great packaging and a neat seating system makes it well suited to most families' needs. 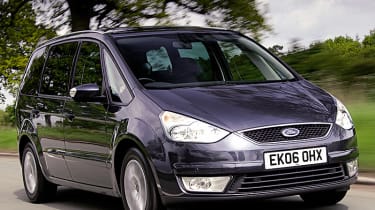 Driving: Whichever version of the Galaxy you choose, you'll find confidence-inspiring handling and a composed and well-controlled approach to corners. Compared to softer competitors, this nimble, dynamic attitude reinforces the Ford's car-like feel. Yet while noise levels are all but a match for the class best, the Ford's firmer ride does make it less relaxing. Petrol and diesel engines should all be familiar, and it's the TDCi oil-burners that offer the easier-going performance. Even the smaller 1.8-litre is responsive at lower revs and smooth higher up, while the superb gearbox means frequent shifts are a pleasure, not a pain. The higher-powered 2.0-litre is a better choice if you intend to carry heavy loads, though.

Marketplace: The mass-market appeal of the Ford badge has ensured the Galaxy best-selling class status. Ford realises buyers are becoming more discerning though, so offers a new styling theme, called 'Kinetic'. We think it not a universal success -the back looks taller than the old car, despite it actually being lower. The new model is also wider and longer, and offers a choice of four-cylinder petrol and diesel engines. Trims include LX, Zetec and Ghia (the latter actually proving the best-seller of the old car's range - in diesel guise, naturally). Rivals include the stylish Renault Espace, ageing Chrysler Voyager and the even older VW Sharan (actually the old Galaxy's twin). But it's not hard to see that compact MPVs have taken over the dominance once enjoyed by these large people carriers.

Owning: With 30 per cent more luggage space, plus 31 stowage compartments and up to 32 seating configurations, the Galaxy's numbers seem to add up. The big tailgate extends to the edges, making the boot opening as wide as possible, and the rear door slides up easily and isn't too heavy. Combine this with a low floor and the Galaxy is easy to load up. The trouble is, there's not much load space with all the seats in place - though lower the rear two and a 435-litre boot is on offer. The seats fold flat to the floor easily, bit it's the handles operating the middle chairs that are easiest to use. Pull them once and the outer seats tilt and slide forward to aid access to the rearmost ones. Tug them again and they drop down completely, giving a flat floor all the way through. Dubbed FFS by Ford, the system isn't as elegant as Chrysler's Stow 'n Go, but should suit the needs of most. All seats tilt, slide and offer lots of space, too. On the downside, they are a bit flat and unsupportive. What's more, with exposed metal on display and windows that don't lower all the way down, the layout has a bit of a budget feel. The driving environment is far from radical too, but all the basics are spot-on. Thin A-pillars make for a good view out, the design is logical and the car-like driving position is the best here. It also enjoys good retained values, fuel economy and low servicing costs, plus an expected five-star Euro NCAP rating.