Of all the Nineties' big MPVs, the Ford Galaxy has consistently been a top-seller. Launched in June 1995, it offered impressive new levels of driveability, feeling more like a practical saloon than a conventional people carrier. 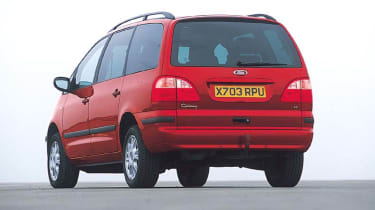 Of all the Nineties' big MPVs, the Ford Galaxy has consistently been a top-seller. Launched in June 1995, it offered impressive new levels of driveability, feeling more like a practical saloon than a conventional people carrier. Thanks in part to Ford's huge dealer network, Galaxy sales were far higher than those of the virtually identical VW Sharan and SEAT Alhambra. So today, there are thousands on the used market. Inside and out, the car resembled a big Mondeo. Seven seats came as standard in all but Ghia models, which got six captain's chairs. The 2.3-litre petrol or VW-sourced 1.9 TDI 110 diesel were the pick of the engine range. A facelift in 2000 brought a sharper nose and better-equipped interior. The diesel was boosted to 115bhp, with a 130bhp unit following. The 'MkII' is the best Galaxy - but there are some bargain early examples in the classifieds.Checklist * Security: thieves can open windows via the locks of early models - check the barrel for damage. Also, an alarm wasn't standard fit, and remote locking was optional. * Engine: petrol V6s can suffer coil pack troubles; VW recalled its cars, Ford didn't. The TDI Air Mass Flow sensor can also fail, indicated by rough running and a lack of pull. * Safety: amazingly for a family car, there is no centre three-point seatbelt. ABS was standard-fit only on V6 versions until the 2000 facelift, when it was introduced on all. * Interior: air-con can be troublesome. It should blow cold almost immediately - otherwise, the system either needs a re-gas or a replacement compressor. The latter is a costly dashboard-out job. * Tailgate: the tailgate window washer pipe stretches and splits - usually revealed by damp passenger carpets. The central locking module is located here, so look carefully.Driving Impressions The Galaxy remains one of the sportiest MPVs to drive, with an eagerness in corners at odds with its tall profile. Even the steering is sharp, and while the ride is firm, it isn't unacceptable. The 2.0-litre petrol and 90bhp diesel units struggle, while the V6 is thirsty, so go for the smooth 2.3 petrol or punchy TDI 110. Visibility is good, but hidden overhangs can make parking tricky.Glass's View Demand for big people carriers such as the Galaxy has been easing back for some time now as would-be buyers continue to downsize to the compact MPV sector. Demand and prices are generally stronger from September to March, which means there are some good bargains to be had at the moment. The 2.8 V6 model can be hard to move on, but diesel examples should find homes without too much difficulty. Avoid anything finished in white, and check for clocked ex-taxis. Jeff Paterson, senior editor, Glass's GuideLife With A Galaxy The Galaxy is the perfect family transport - bags of space and comfort, plus affordable running costs mean it serves my family's needs exactly. I'm a big fan. Mal McCarthy, Crumlin, Co Antrim I bought my Galaxy because I occasionally need to use it as a van. It's a well designed vehicle, but I've had all manner of electrical problems with it. Nothing serious - just irritating glitches. Dale Clarke, Congleton, Cheshire

This spacious and comfortable full-sized MPV is Ford's answer for those with large families. Despite its dimensions, the Galaxy is very car-like to drive, the suspension giving taut handling with plenty of feedback available from the responsive steering. The gearshift is positive and light, too, and the Galaxy is a great companion in town and on motorways. There is a wide range of engines, but the best are the VW-sourced turbodiesels, which offer great pace and economy.