A new Ford Ka+ Active city car SUV has joined the facelifted Ka+ range, and it's now made its public debut at Geneva 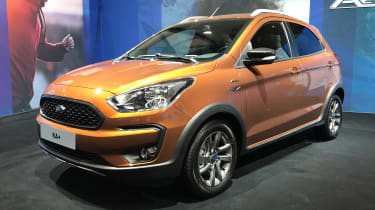 Ford has updated the Ka+ for 2018 with a facelift, including new styling, new infotainment, and a range of new engines. However, the headline news is that a new Active-badged crossover version of its city car has also been introduced, which has now made its public debut at the 2018 Geneva Motor Show.

The new Ka+ Active joins a clutch of city car crossovers now on sale, such as the Kia Picanto X-Line and Vauxhall Viva Rocks. Standing out against the rest of the Ka+ line-up it boasts SUV-inspired styling with faux aluminium bash plates, plus black plastic cladding and wheel arches. It rides on unique 15-inch alloy wheels, and up top a set of roof rails sprout above the doors.

Mechanical changes include a 23mm increase in ride height, while the Ka+ Active also features a wider track, larger front anti-roll bar and tweaked electronic power steering. The dampers have been retuned too; Ford says this should result in a smoother ride. The interior features unique scuff plates and a leather steering wheel, while the stripe pattern on the fabric upholstery is reserved for the Active model only too. 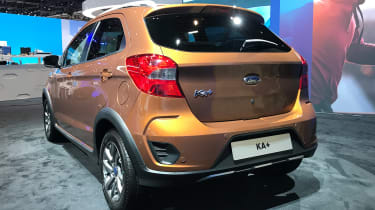 Across the Ka+ line-up, design changes include a revised front apron with a new grille, new headlamps and new C-shaped daytime running lights. The rear bumper has been altered too, with a subtle and slightly sportier profile, and a boot-opening button has been placed on the tailgate.

Inside, the biggest news is the addition of a SYNC 3 6.5-inch tablet style touchscreen replacing the old car’s outdated SYNC 2 display, complete with Android Auto and Apple CarPlay. A starter button system arrives as well.

It’s all change under the bonnet. The 1.2-litre four-cylinder petrol engine is out, in favour of a new three-cylinder unit. It’s still 1.2-litres in size and is available with the same 69bhp and 84bhp power outputs, but produces ten per cent more torque. Stop start tech is enabled too.

Alongside the fresh petrols, a diesel option arrives. It’s a 1.5-litre TDCi unit intended to inject a bit of long distance cruising ability into the Ka+, developing 94bhp and 215Nm of torque, with tailpipe emissions of 99g/km.

No prices for the Ka+ Active have been revealed, but the regular refreshed range will arrive in UK showrooms this summer, priced from £10,795.