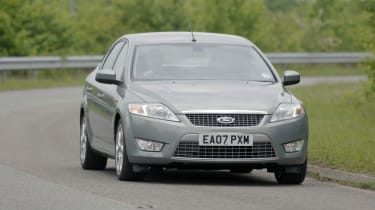 The new 2.2-litre TDCi engine is a welcome addition to the Ford line-up. Strong, smooth and refined, it delivers impressive performance, decent fuel consumption and low CO2 emissions. If you must have the go-faster 2.2 option, it won’t disappoint you, but the smaller 2.0-litre variant is already an outstanding choice in the Mondeo. We’d recommend you try that before splashing out extra for the new flagship diesel.

Ford is at the head of the pack when it comes to diesels. Its excellent selection of TDCi engines already covers all the bases, as it includes 1.4, 1.6, 1.8 and 2.0-litre units – and now the range has been boosted by a revised ver­sion of the powerful 2.2-litre.

The new powerplant goes on sale this month and appears in the S-MAX and Galaxy people carriers, as well as the acclaimed Mondeo. The engine will also interest hot hatch fans, too, as it could even find its way under the bonnet of the recently face­lifted Focus, as Ford looks to com­pete with SEAT’s oil-burning Leon FR.

The big question is, does the latest diesel maintain the reputation of the firm’s pre­vious TDCi powerplants? These engines can rightly claim to have transformed Ford’s reputation – before the original 1.8-litre version was introduced in the first-generation Focus, the blue oval sat very firmly at the bottom of the oil-burning pile. So the newcomer has a lot to live up to.

It certainly gets off to a good start, producing 173bhp and a superb 400Nm of torque. Those figures are up 20bhp and 40Nm respectively on the outgoing 2.2-litre, and provide the Mondeo with excellent straight-line performance. The engine debuts in a fresh flagship for the range, badged the Titanium X Sport (see Page 17), but Zetec and Titanium X models will also be made available. In five-door guise, it completes the sprint from 0-60mph in 8.4 seconds on the way to a 139mph top speed.

In-gear performance is even more impressive thanks to the engine’s overboost facility, which increases the maximum torque output to 420Nm for short periods under full throttle. The Mondeo is already renowned as the best-driving car in its class, and the new diesel shows its worth by providing impressive pace to go along with its agile handling.

Importantly, the 2.2-litre is smooth and refined, and economy hasn’t suffered, either. The unit is mated to a six-speed manual transmission, and is capable of returning 45.6mpg.

What’s more, it emits only 165g/km of CO2. That places the flagship diesel in road tax band D, which will make it a popular choice with business users and private buyers alike.

When it comes to equipment, the Titanium X has got just about everything you’ll need. A six-disc in-dash CD autochanger, rain-sensing windscreen wipers, automatic headlamps and dual-zone climate control all feature on the car’s generous standard equipment list.

Ford’s gutsy five-cylinder petrol engine is also availble in the Mondeo, but the superior economy and strong performance of the 2.2 TDCi make the diesel a more sensible alternative for enthusiastic drivers.

Rival: Vauxhall Insignia When it hits the UK later this year, the Insignia promises better handling than any big Vauxhall before it – and with its sleek looks it could leave the Mondeo in the shade. However, the flagship 2.0-litre diesel at launch will only be able to muster 158bhp.