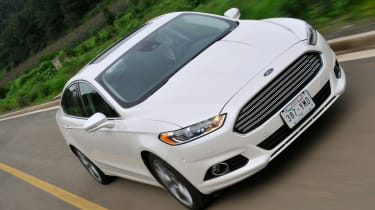 The Mondeo has been moving steadily upmarket over the last three generations, and this new model continues the trend. Its civilised road manners, quality interior and high-end tech are all within touching distance of premium rivals. As with its predecessor, it’s good fun on the right road too, especially in 2.0 EcoBoost guise. If you’re after a petrol model, though, wait for the more economical 1.0 EcoBoost to arrive.

You’ll have to wait until next September to get your hands on the new Ford Mondeo, but we’ve managed to climb behind the wheel of a US-spec car to bring you an early verdict.

This fourth-generation Mondeo is known as the Fusion in the US, where our test drive took place. And as it’s Ford’s latest global car, the UK version should be virtually identical, apart from new badges and slightly stiffer suspension.

Our model was a four-door saloon, but the Mondeo will also be available as a five-door hatch and a more practical estate – and all will feature the same styling. There’s more than a hint of Aston Martin about the gaping grille, but it works well with the slim headlights, sculpted bonnet and sharp creases along the flanks.

Interior quality has taken another giant leap forward, and there’s a more grown-up feel to the less cluttered dashboard. Taking pride of place is an eight-inch colour touchscreen, loaded with Ford’s latest SYNC and MyFord Touch technology. The voice activation and Wi-Fi hotspot functions are bang up to date, but the interface can be confusing.

The new Mondeo has a lot to live up to – its predecessor was one of the best cars to drive in its class. It’s based on a new platform that’s 10 per cent stiffer than before, and first impressions are excellent.

Even in US trim, body roll is well suppressed, and there’s loads of grip from the big Continental tyres. The steering feels firm and responsive, too, so there’s lots of fun to be had on a twisting B-road.

But a family car such as this isn’t all about fun – it also needs to be safe and spacious. There are lots of electronic safety systems, including active park assist, lane-keep assist and a blind-spot warning light in the wing mirror.

There’s enough space for five adult passengers, with plenty of head, shoulder and legroom in the back. Plus, if you go for the estate model, you’ll get around 1,750 litres of storage space.

The Mondeo hit the headlines a few weeks ago, when Ford revealed the new model will be available in Europe with a tiny three-cylinder 1.0-litre EcoBoost engine – emitting less than 130g/km of CO2 – and as a petrol-electric hybrid. But more conventional engines will be offered, too. The diesel range will include 1.5 and 2.0-litre options, while 1.6 and 2.0 turbo EcoBoost engines complete the line-up.

We drove the latter, and despite the fact our car’s engine was barely run in – plus we were driving at an altitude of 2,400 metres (the thinner air can reduce power) – it revved cleanly and accelerated hard. It’s just a shame a car this fast doesn’t sound a bit sportier.

The six-speed automatic gearbox fitted to our model was smooth enough for cruising around, but if you want to up the pace, it’s best to take control yourself with the wheel-mounted paddles.

On paper, fuel consumption of around 40mpg is reasonable for a car with this much power, but in reality it’s tricky to match – around town, we barely registered 20mpg on the trip computer. Still, it’s difficult to criticise it too harshly for that, when there will be more fuel-efficient models in the range.