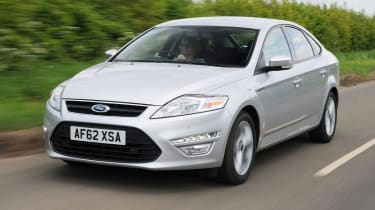 Entry-level doesn’t always mean basic. The Mondeo Graphite keeps everything that’s good about the Ford family favourite – it’s great fun to drive and has loads of space – without demanding too many compromises on equipment. And all for the same price tag as a Focus 1.6 TDCi Zetec. Really, what’s not to like?

When Ford announced that factory disputes meant we wouldn’t see the new Ford Mondeo here until late 2014 – even though it’s already on sale in the US as the Fusion – we were told there were plans to keep the current car selling. This entry-level Mondeo Graphite model is the first part of those plans, and with a price that undercuts the entry-level Mondeo Edge by £2,000, it’s certainly grabbed our attention.

You wouldn’t immediately guess the £15,995 starting price from the styling – after all, the car has alloy wheels and still looks pretty sharp. It impresses inside, too, with air-con, Bluetooth, steering wheel-mounted controls and leather on the gearstick and steering wheel. Buyers miss out on cruise control, though, and there’s no alarm, either.

Running costs are low, too: it averages 65.7mpg and emits 112g/km of CO2. Combine those emissions with the rock-bottom price, and the Graphite makes sense for company car buyers.

The Mondeo still feels really sharp to drive, too – a testament to its chassis six years after it was introduced. The steering is responsive and nicely weighted, while the firm ride proves to be just stiff enough to make the Mondeo feel agile without ever being uncomfortable. In terms of driving pleasure, it’s difficult to pick between this and the recently introduced Mazda 6.

If the hatchback body isn’t quite practical enough, you can always opt for the Mondeo Graphite estate, from £17,245. That increases maximum boot space from 1,448 to 1,685 litres.

And just because the Mondeo Graphite is already decent value, don’t think you can’t get the big big discounts Ford dealers are famous for. We’ve already seen brokers offering 20 to 25 per cent off Graphite models – so you can pick up the model tested here (1.6 TDCi Graphite) for around £14,000.