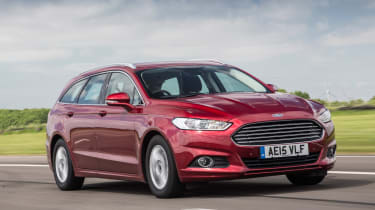 Offering four-wheel drive certainly broadens the Ford Mondeo’s appeal, but there are more convincing all-wheel-drive estates on sale. More rugged and better equipped rivals like the SEAT Leon X-Perience and Skoda Octavia Scout give stronger off-road, all-weather ability with added ground clearance. Ultimately, a good set of winter tyres on a front-driven Mondeo Estate will be just as effective as 4WD and won’t hit fuel economy.

We're already very familiar with the new Ford Mondeo. But this Mk5 model becomes only the second version to be offered with four-wheel drive, following the launch of the original back in 1992.

We tested the load-lugging Estate with the 148bhp 2.0-litre TDCi diesel engine. Adding four-wheel drive to the Mondeo will set you back £1,500 over the regular front-wheel-drive estate, bringing the price of our mid-spec Zetec car up to £25,345. But none of the Ford’s immediate rivals gets all-wheel drive without venturing into far more powerful (and pricier) engines – a 4x4 Passat will cost you around £11,000 more unless you opt for the off-road biased Alltrack. 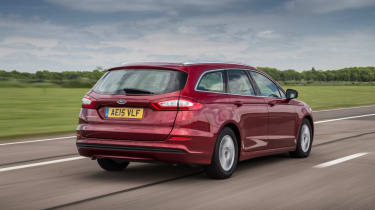 The exterior styling doesn’t provide any clues that this Mondeo is a four-wheel-drive model. Unlike the original, there’s no extra badging, but then this latest family Ford is already smartly styled and widely regarded as the freshest-looking choice in its class.

You won’t initially spot any features to mark it out inside, either, but flick through the menus on the digital instruments and you’ll find a handy readout showing how power is being distributed to each axle.

Knowing the four-wheel-drive system is there to keep you out of trouble is a welcome confidence boost, but you’ll struggle to tell the difference between this and the front-drive car in normal conditions.

In the wet or the dry, it has similar front-end grip to the standard Estate. Snow and ice may be where the benefits lie, but we’ve previously found a set of winter tyres to be just as effective in these situations – and unlike full-fat 4x4 estates such as the Skoda Octavia Scout, there’s no extra ground clearance for occasional off-road use.

The biggest problem with opting for four-wheel drive on the Mondeo is weight. The system adds another 78kg to the Estate, and the current model doesn’t feel that light on its feet in the first place. Our base 2.0 TDCi struggles to pull the car along with much gusto and is hindered further by tall gearing. 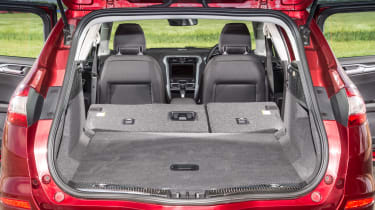 For the most part, the ride is composed and refined, and initial body control is good – but push harder into bends and it feels loose and heavy compared to a Mazda 6 Tourer, for example.

Economy also suffers as a result, with claimed returns of 57.6mpg and 127g/km CO2 emissions – down 5.2mpg and up 15g/km over a standard front-drive model.