Building on the popularity of the 2015 Mustang, the new 2015 Shelby GT goes global 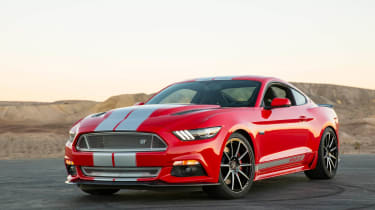 Based on the all-new 2015 Ford Mustang GT, the Shelby American GT has been unveiled as a high performance halo for the Mustang range. Better yet, the 2015 Shelby GT is scheduled for international delivery from early Spring 2015, making it the first model in the company’s history to be designed and developed as a global car.

With maximum performance in mind and 50 year’s experience in the field behind it, the new muscle model is built with all exterior parts exclusively designed and developed in-house at Shelby American. The most powerful Shelby Mustang ever offered for sale, the new GT uses lightweight carbon fibre for all aerodynamic components including the brand new bonnet with functional air vents and a giant power bulge. 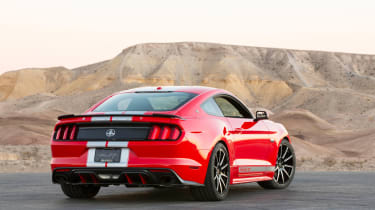 In addition to delivering new details in the design, the 2015 Shelby GT retains its performance stats - featuring Ford Racing Performance Parts including a 618bhp supercharged engine, a performance handling kit and a chrome-tipper Borla exhaust. Stopping duties are managed by a set of Wilwood six piston front brakes.

The 2015 GT drives on a staggered set of WELD Racing wheels and Michelin tyres as well as offering a long list of upgrade options. These include a ‘15 Shelby GT’ version of the car with a 700bhp+ performance upgrade package, adjustable suspension and an upgraded brake kit. 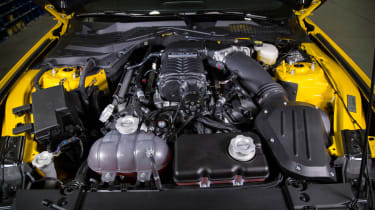 First conceived in 2007 with a 4.6L Mustang as its base, the Shelby GT was assembled at Ford before being shipped to Shelby in Las Vegas for its transformation. Today’s 2015 Shelby GT is developed in-house and designed to be sold globally via the Mustang’s international distribution networks.

To get a Shelby GT, existing 2015 Mustang GT Fastback or Convertible owners can contact their dealer and pay a $39,995 (£26,500) upgrade fee. Shelby will then carry out the modifications and issue the car with a unique number and official documentation to prove its authenticity.

What do you think of the Shelby GT? Let us know in the comments section below...

From the McLaren 570S to Mazda MX-5, these are the 10 sports cars that we think are the best on sale
Ford Mustang review