Black Shadow and Blue models add styling tweaks and equipment, with the European market in mind 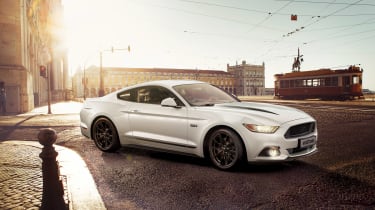 Ford has lifted the lid on a pair of new special edition Mustangs alongside the reveal of the all-new 2017 Ford Fiesta, exclusive for the European market.

The new limited edition Pony cars get exclusive design tweaks and finishes inside and out, as well as plenty of standard equipment thrown in.

• Our favourite ever muscle cars

The Mustang Blue edition is the tamer of the two, and will be available on either the 2.3-litre four-cylinder EcoBoost engined car or the 5.0-litre V8 GT model. The Grabber Blue paint finish is a nod to the Shelby GT350 and GT500 models of old and is accompanied by dual racing stripes down the bonnet and roof, plus black 19-inch multi-spoke alloy wheels. 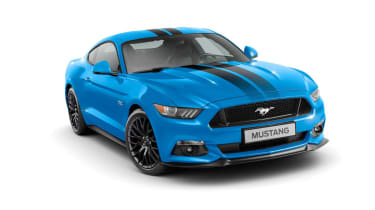 Alongside the Blue edition is the Mustang Shadow Black Edition. This model will only be available with the 415bhp 5.0-litre V8, but buyers will get a choice of four exterior colours – Platinum White, Triple Yellow, Race Red and Grabber Blue.

The Shadow Black edition gets unique exterior design elements, such as the black Pony badge on the front grille, the new black Y-spoke 19-inch alloy wheel design, black 5.0-litre GT badges on the front wings, plus a black decal kit introducing stripes on the bonnet bulges and across the bottom of the doors.

Inside it gets a premium black leather interior with heated and cooled front seats, plus a 12 speaker ShakerPro audio setup as standard. Parking sensors are included on this model too, while both special edition Mustangs get an eight inch touchscreen infotainment interface with Ford’s SYNC 3 system with sat nav.

The Mustang Blue edition is already available in the UK, though not as a special edition model – all of the equipment included can be found on the options list instead. The Mustang Black Shadow also won’t arrive in the UK as a limited edition model, but it could arrive as an optional pack in the second half of 2017.

What do you think about the new special edition Mustangs? Let us know in the comments.

From the McLaren 570S to Mazda MX-5, these are the 10 sports cars that we think are the best on sale
Ford Mustang review