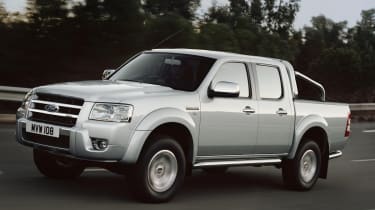 Ford’s new special-edition Ranger is much more than a storm in a pick-up – it’s actually a convincing attempt to broaden the appeal of a robustly built commercial vehicle. While we were surprised at the lack of practicality offered inside the car, the huge capacity of the rear and four-wheel-drive chassis are sure to appeal. On the road, the suspension is firm, but thanks to extra sound-proofing and the willing TDCi diesel engine, the Thunder could easily be used on long-distance commutes.

Get ready to rumble! Ford has un-leashed a new special-edition Ranger called the Thunder, and it looks sure to go down a storm.

Powered by a 2.5-litre TDCi diesel engine delivering 140bhp, this flagship double-cab model offers all the versatility of a van, yet with the comfort and refinement of a family car... But how does it measure up?

The tough design, which is complemented by Ford’s unique ‘two-bar’ grille, highlights the fact that the Ranger has been built for business. The tall ride height, combined with the chunky tyres and flared wheelarches, leave it looking as serious as any mainstream off-roader.

Inside the cabin, Ford has spent a considerable amount of time and money improving the model’s family appeal. As well as a smart new dashboard, the Ranger gets well trimmed seats offering great comfort and support. Air-conditioning is standard, and the stereo will even play MP3 digital music files. Safety equipment includes driver and passenger airbags.

Although the engine is vocal, it’s clear efforts to improve refinement have paid dividends. The impressive 2.5-litre TDCi is smooth and powerful. Steering is accurate, and given that the rack has very tall gearing, there is acceptable feedback, too.

Considering the Ranger’s jacked-up stance and large tyres, it still offers plenty of feel. Only the ride belies the machine’s utilitarian origins. Thanks to leaf-spring suspension at the rear, progress can be bouncy, particularly when driving on rough roads.

However, the biggest surprise is the car’s lack of practicality. Although the flat pick-up bed is huge, there is virtually no additional storage space in the cabin. Rear pick-up covers are available, but expensive.

The new Ranger is unlikely to drag owners out of family models such as the Ford Mondeo and Vauxhall Vectra. But for van drivers in the market for a real multi-purpose vehicle, the Thunder is definitely worth a second look.