It's the most eagerly awaited new Ford since the Focus, but is the blue oval's latest offering worth the wait? 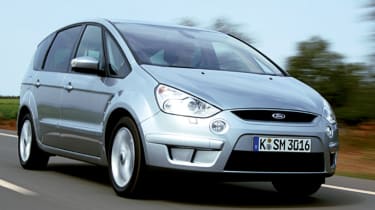 With sales of traditional family cars dropping, the sector required a shot in the arm - and the S-MAX is it. While it needs more third-row space, and the driving experience could be sportier, it is good-looking, flexible, well kit-ted out and very usable. Family buyers swap-ping out of a Mondeo will certainly be making a step up the ladder.

It's the most eagerly awaited new Ford since the Focus - and with sales of large family cars in freefall, it's crucial to the firm's success. The all-new S-MAX is the blue oval's practical vision of the future, and promises a fun driving experience and a flexible seven-seat cabin, wrapped up in a sporty body. On sale in June, the new MPV will be priced from £16,995. It's more costly than the traditional Mondeo, but is it really as good as it sounds? Auto Express got behind the wheel to find out.

Based on the daring SAV concept - which debuted at the 2004 Geneva Motor Show - the S-MAX features bold lights, a steeply slanting screen and rakish profile. As a result, it is the sportiest-looking MPV yet launched.

The styling also disguises the car's size. Longer than the current Galaxy, it's only 50mm shorter than the forthcoming model - which Auto Express drove last week (issue 904). The two cars share suspension and chassis components, which will also be used to underpin an all-new Mondeo. Predictably, there is plenty of space inside, but while three adults will be comfortable in the middle row, the final two seats lack legroom. If you need to transport seven grown-ups, go for the Galaxy.

Flexibility is brilliant, though. As with Land Rover's Discovery, the second and third-row chairs fold flat easily without having to be removed, leaving a load area of up to 2,000 litres. And thanks to no less than 26 cubbies, there's plenty of space for small items, too. Cabin quality is also impressive, with a soft-feel facia and chrome-ringed air vents.

Underneath, there's a sophisticated multi-link rear suspension system, while core engines are a 143bhp 2.0-litre pet-rol unit plus 123bhp 1.8 and 138bhp 2.0 diesels. Our range-topper had the same 217bhp 2.5-litre five-cylinder turbo as the hot Focus ST - and with a 7.9-second 0-62mph time and 143mph top speed, it's certainly fast. It's also very refined - however, its 30mpg and high price tag make the diesels the more obvious family choice. The S-MAX is easily the class's best handling and riding MPV. Even so, it's not as sporty as Ford wants you to think, with plenty of body roll and steering that can't match the C-MAX or Mondeo for sharpness. Drivers looking for more responsiveness may want the £750 adaptive-damping opt-ion, available later in the year.

All buyers will be impressed by the S-MAX's safety, though. With a driver kneebag and curtain bags in the first and second row, plus a very stiff structure, a full five-star Euro NCAP rating is likely. The S-MAX isn't quite the future of motoring, but it is a genuinely interesting family car that offers much more than a Mondeo.