Ford MPV is a master of multi-tasking – and we’ll be sad to see it go... 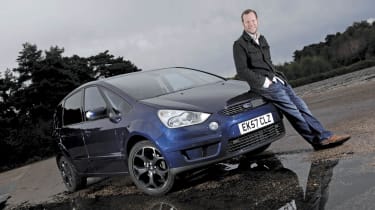 One baby, two grandparents, cots, prams, plants, broken bicycles, new furniture and a puddle of sick… It’s amazing what our S-MAX has carried over the past 12 months! But whatever Auto Express’s team of hard-to-please drivers have used the Ford for, all have been universal in their praise...

Few of our long-termers have proved as popular – particularly over the summer holidays – or as versatile. Most recently, the S-MAX carried six people across the Channel for a five-day trip to Bologne. It also provided transport to a friend’s wedding, where its tinted rear windows let my family use the cabin as a makeshift dressing room in a car park.

Swapping from jeans to a suit was not exactly easy, but ultimately a far more sensible option than getting undressed in the open!

In an office poll, the S-MAX triumphed as the model on our fleet staffers had found most useful. Now, as its departure nears, it looks like there will be one last opportunity to put this impressive practicality to the test, as I am looking forward to a long-distance trip up to Scotland in a few weeks.

First, though, we can’t lavish all this praise on the S-MAX without looking at some of its shortcomings. I want to point out at least one detail that has never failed to divide opinion: the wheels...

In a fit of enthusiasm at this year’s Geneva Motor Show, I managed to convince Ford to supply me with a set of special black rims, complete with a green pinstripe. I thought they looked great; my colleagues were not convinced.

On a more serious note, I can’t work out why the front tyres are wearing so fast. Only 16,000 miles in, and the car is nearly due its second pair. And at more than £200 each, the rubber is far from cheap...

If you have found your S-MAX has the same appetite, E-mail me at motoring.editor@autoexpress.co.uk – I’d love to hear from you.

The S-MAX demands no compromises. Great looks, fantastic driving dynamics and a spacious and versatile interior make it unbeatable. The 2.0-litre diesel can feel underpowered occasionally, but it delivers good fuel economy given the Ford’s size. Just don’t get me started about those wheels! James Disdale Road tester