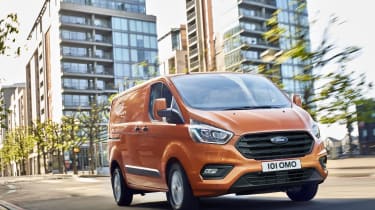 Ford has taken the wraps off a heavily revised version of the Transit Custom, a medium-sized panel van that's a key part of the UK's best-selling range of commercial vehicles.

Ford's Dagenham-built EcoBlue 2.0-litre diesel engine is still at the heart of the range, but a new plug-in hybrid (PHEV) version is also on the way a little while after launch. The engine comes with 104bhp, 128bhp and 168bhp power outputs as with the current model, which has used the same set of new engines since 2016.

A new ECOnetic variant will be available on 300 SWB versions, and that model uses the lower-powered engine along with a calibration for economy, stop-start and low rolling resistance tyres to save fuel. It also has a 62mph speed limiter, and it returns 49.6mpg and emits 148g/km of CO2. 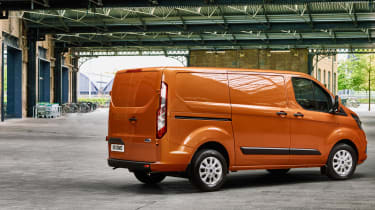 As before there are two roof heights, two wheelbase options and payload options up to 1,450kg. Variants include van, kombi and double-cab-in-van models. A new front-end design with is the most noticeable change for the 2018 model, and there's a new grille and front-end along with an updated interior and better on-board tech.

The interior is apparently based on that of the new Fiesta, with a focus on comfort and better quality overall. However there are still the Transit's expected hard-wearing materials and 25 litres of stowage space around the cabin. New features include a fold-out cupholder and new door panels that are more practical than before. Ford’s SYNC 3 infotainment system is also included, or a smartphone dock for models without the larger screens. Android Auto and Apple CarPlay are included too.

There's no word on pricing yet but we expect the facelifted Transit Custom to cost around the same as the current van, which starts at £25,430.

What do you think of the facelifted Ford Transit Custom? Let us know in the comments...