Unveiled at the 2019 Brussels Motor Show, the Ford Transit Custom Nugget boasts an attic bedroom and its own indoor toilet 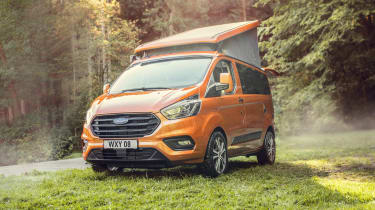 This is the Ford Transit Custom Nugget. Converted by Ford’s specialist motorhome partner, Westfalia, the Nugget is available in either short or long wheelbase, and comes with its own kitchenette, a living and dining area and sleeping accommodation in its roof extension.

Standard amenities include a double-burner gas hob, a sink, a refrigerator, an outdoor shower, rear privacy glass with flip-out windows and an auxiliary heater for use when the camper is parked. The Nugget also has two 42-litre water-storage tanks for fresh and waste-water respectively.

Long wheel-base models are around 37cms longer than the standard camper, adding space for a larger wardrobe, an extra washbasin and a built-in toilet, situated at the rear of the vehicle. 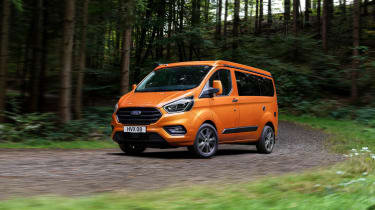 The front two seats can swivel through 180 degrees to face the rear, allowing for up to five people to be seated around the Nugget’s table. Should you require more dining space, a fold-out table with two chairs provides extra space under the camper’s retractable awning.

In the cockpit, the Nugget comes with a healthy amount of storage space and an eight-inch infotainment system fitted with sat-nav and Ford SYNC 3, allowing support for voice and gesture control. Other features include adaptive cruise control, a rear-view camera and an optional premium sound system.

It’s powered by Ford’s 2.0-litre four-cylinder EcoBlue diesel engine. Available in two states of tune, customers can select either a 128bhp or a 168bhp unit, both of which are mated to a six-speed manual gearbox as standard. Ford also claim economy figures of up to 44.8mpg and emissions ratings of 165g/km of CO2.

UK prices for the Nugget are yet to be announced. However, Ford tells us that its looking to officially roll-out the Transit Custom-based camper shortly, following its research into the expanding campervan market in Britain. We’ll update you with pricing information as soon as it’s available.

Now read our review of the Ford Transit Custom. Let us know your thoughts in the comments section below…