A new look, hybrid technology and a 10-speed auto are all included in the 2019 revisions for Ford's two-tonne Transit 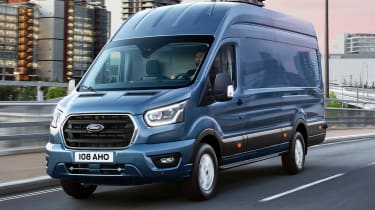 With a revised Transit Custom going on sale earlier in the year, and updated Courier and Connect models also appearing, it was only a matter of time before the full-size Ford Transit van was also on the receiving end of a mid-life update. And the IAA Commercial Vehicle Show in Hannover saw the debut of the new model, featuring a new look, the latest driving aids and Ford's latest telematics technology.

The new Ford Transit, which will go on sale in mid-2019, has been given a new three-bar grille that is similar to that seen on the Transit Custom, and is inspired by Ford's passenger car range. It's a more upmarket look, while top-spec models get chrome trim, xenon headlights and LED daytime running lights.

Under the bonnet, there's an evolution of the 2.0 EcoBlue diesel that was introduced in 2016 and offers even better efficiency. There are 104bhp, 128bhp, 168bhp and new 182bhp versions on offer, all with stop-start, while electric power steering has been added to improve efficiency further. All engines get a six-speed manual gearbox as standard, and from 2020 a 10-speed auto will be available on rear-wheel-drive Transits.

Another innovation used on the Transit is a 48-volt micro-hybrid system, the first such set-up to appear on a large van. The mHEV system is designed to improve fuel economy rather than make the Transit any faster, and it boosts economy by around 3 per cent. Throttle response is improved from a standstill, though, courtesy of the lithium-ion battery pack that stores energy under deceleration that can be re-used when accelerating. Around town, Ford claims that this system can boost fuel economy by almost 10 per cent.

Tech on board the Transit has been improved, too. As well as SYNC3 (which was optional last year), Ford has enhanced the van's connectivity for fleet operators with Ford PassConnect. This system allows fleet managers to keep an eye on their vehicles and incorporates MyKey, which allows them to set speed limiters, limit the radio's volume and put other restrictions on a vehicle.

The addition of electric power steering also means Ford has been able to fit the latest semi-autonomous safety kit to the Transit. This includes active park assist and lane keep assist, while a drive mode selector is also offered on the Transit 4x4 that optimises the van for different driving conditions: Eco, Slippery and Mud/Rut modes are available, as is a Tow/Haul mode for heavy trailers. Blind spot warning with a trailer setting, adaptive cruise control, traffic sign recognition and pedestrian detection are all available, while front and rear cameras are on the options list, too.

Payloads up, kerb weight down

Another bonus for business is that the Transit has an increased payload over the old model. Final numbers are yet to be confirmed, but an aluminium bonnet, new steel construction, a trimmed-down exhaust and the replacement of some steel parts with composite materials have all contributed to an overall weight saving for the new van. 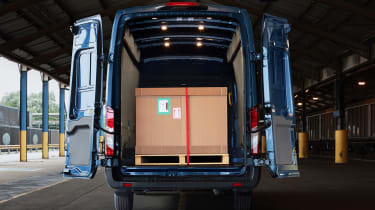 As usual, there will be panel van, crew cab, tipper and chassis cab versions of the Transit available, while Ford has a long list of accredited companies that are able to carry out conversion work to suit all business needs. We'll get our hands on the new Transit early in 2019, ahead of sales beginning in mid-2019.

Looking for a new large panel van? Take a look at the best on sale…