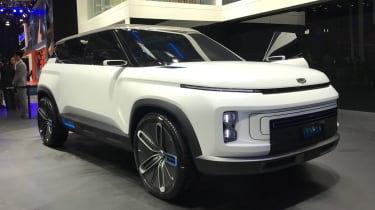 This is the Geely Concept Icon, a new SUV created to show how far the fast-emerging Chinese brand can push its design language - and to make headlines at the Beijing Motor Show, where it has been unveiled.

The Concept Icon is a crossover that represents a major step from Geely’s more conservative offerings in its local market. It appears to mix styling cues from a number of sources; the clamshell bonnet’s leading edge has traces of Range Rover Evoque, while the ‘floating’ roof has elements from that car but also the likes of the Kia Soul. 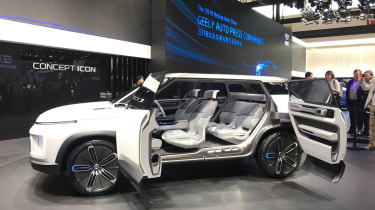 There are some original elements, however. There’s an unusual ‘step’ in the window line near the rear and the doors - which open in opposite directions to give pillarless access to the cabin - sit proud of most of the bodywork along the flanks. The front has ultra-slim headlights and a distinctive squared-off section in the front bumper, including intricate lights and neatly integrated air intakes.

Guy Burgoyne, the vice-president of Geely Design China, says the vehicle has a “flatter, 8-bit-inspired design” - hence the simple surfacing and sharp angles. Inside, there’s a paired-back cabin treatment that’s meant to maximise the amount of storage space - and focus on technology.

The neatest trick is probably the instrument panel, which is displayed through a soft-woven fabric that runs across the whole dashboard. The display ‘fades away’ when not in use, leaving the infotainment system in the centre of the fascia as the sole display on view. Rear passengers, meanwhile, get a couple of screens through which they’re able to share information.

Geely has not announced any plans to bring the Concept Icon to production - nor revealed any details on its powertrain (although it’s almost certain to be electric). But the Chinese brand - which also owns Volvo, Link & Co and Lotus, plus a stake in Mercedes’ parent firm Daimler - has bold global ambitions. It says the latest show car is designed to show “how far it could stretch its DNA to provide a unique offering for future customers”.

What do you think of Geely's Concept Icon? Let us know in the comments section below... 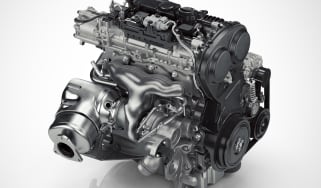