This is the Honda Sports EV concept, a fully electric, two-seat sports car that could plug the gap in terms of performance between the Civic Type R and NSX.

• All the latest from the 2017 Tokyo Motor Show

It follows on from Honda’s Urban EV concept, which debuted at the Frankfurt Motor Show in September. While that model has been confirmed for production in 2019, Honda has not yet given any indication as to when the Sports EV will launch. 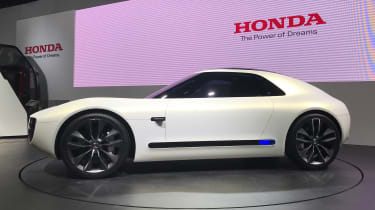 It sits on the same EV platform as the Urban concept, although no technical details have been issued so far. Given the concept is being marketed as a sports car it’s likely that it will be rear-wheel drive.

The two-seat coupe continues the design theme set out by the Urban EV, adopting a retro-inspired look with square taillights, round headlamps and an illuminated front badge set in a blacked-out grille. The elongate bonnet, flared haunches and couple-like roofline give it traditional sports car looks despite the advanced technology under the skin; Honda says the Sports EV uses Artificial Intelligence. 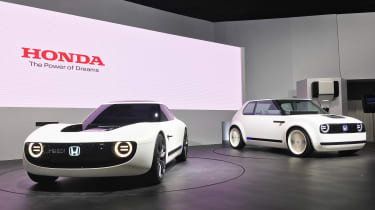 "Honda has been developing products that will lead to the creation of a carbon free society," said Honda CEO Hachigo-san. "We will create products which will enhance convenience for the customer. This new Sports EV is a new proposal form Honda, developed to show the joy of driving in an electric car."

The Sports EV will play a part in Honda's electrification strategy. It says that by 2030 two thirds of its car sold globally will use some from of electrification, however, the Japanese brand intends to meet that target five years earlier in Europe. More details on the Sports EV concept will follow as the Tokyo Motor Show progresses.

Do you like the Honda Sports EV Concept? Let us know in the comments section below...