Honda is working on the 1,000bhp 4-motor electric powertrain it used at Pikes Peak with a view to an eventual production version 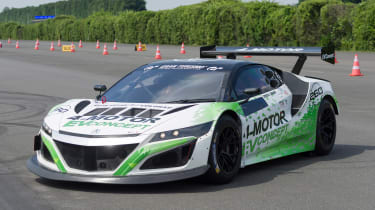 Honda is ramping up plans to bring the 1,000bhp four-motor electric powertrain used in the NSX 4-motor EV Concept to production, according to senior engineers.

The concept racer finished third overall at the Pikes Peak hill climb event in the US last year. That was thanks in part to its all-electric powertrain, comprising four electric motors and a 70kwh lithium-ion battery pack, that developed around 1,000bhp and 800Nm of torque. A motor powering each wheel enables four-wheel drive, while Honda claims the concept is capable of 0-62mph in 2.5 seconds and 0-124mph in 6.2 seconds. 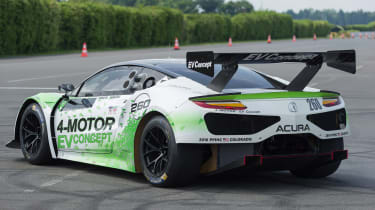 Speaking about the possibility of such a powertrain making its way into a production vehicle, an insider involved with the project told us: “We are developing new technologies, we want to apply the system to electric vehicles – high power and high-response motors, we are researching and developing.”

Due to the cost and complexity of the four-motor EV powertrain, the system would only likely be used on performance models, according to our source.

Honda established a new Electric Vehicle Development Division in October last year to help it accelerate the development of electric vehicles. By 2030 the Japanese manufacturer wants electrified vehicles (including hybrid, hydrogen and plug-in hybrid models) to make up two-thirds of its global sales portfolio.

Honda’s initial focus will be on a wide roll-out of hybrid systems across its model ranges, with a hybrid version of the all-new CR-V expected to go on sale in Europe next year.

Which model should Honda earmark its high performance electric powertrain for? Let us know in the comments…