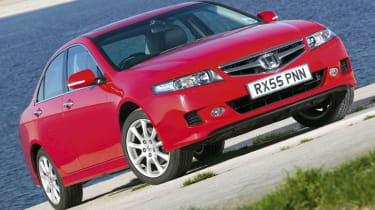 With a new diesel engine and an automatic gearbox, the next Accord is taking shape. Our early drive didn’t give us a full picture of what to expect, but it showed how the car’s performance and fuel economy are set to take a giant leap forward. Its design is derived from the Frankfurt Motor Show concept, so it should be stylish, as well as good to drive.

If you can’t wait to find out how well Honda’s next-generation diesel engine performs, don’t panic. Neither could we – which is why Auto Express has driven an early prototype to see what buyers can expect.

As we reported last week, the brand’s all-new i-DTEC oil-burner will hit the UK next year, under the bonnet of the latest Accord. And to get a taste of what buyers have to look forward to, we drove a prototype version of the drivetrain in the current saloon. And our car was even equip­ped with an automatic gearbox – a first for one of the firm’s diesels.

The new unit represents a radical redesign of the current i-CTDi engine, with an updated cylinder head and a clever catalytic converter to cut pollution. Early impressions are promising, and it’s estimated the powerplant will develop around 150bhp – but Honda is still refining the exact output.

It even meets Euro V regulations for particulate and nitrogen oxide emissions, and the firm has hinted the car should return as much as 60mpg – the trip computer of a six-speed manual prototype backed up that claim.

With more than 340Nm of torque available from 1,800rpm, the clean-revving engine is seriously responsive. The 0-60mph sprint takes just under nine seconds in the auto, and the set-up shifts quickly and smoothly.

For buyers who want greater control, a manual mode is also available, and the transmission was both swift and easy to use. Honda is still deciding whether or not to offer steering wheel-mounted paddles for an even more driver-friendly set-up. Refine­ment is impressive and, although the engine sounds a little rougher than the production i-CTDi unit, further improve­ments are promised as the car gets closer to the showroom. We have no doubt that Honda’s latest diesel is sure to be another stunner.

Our only criticism is that the auto looks flawed, with only five ratios – particularly when compared with the seven-speed Mercedes C-Class. But Honda says enhancements to the ride, handling and refinement of the next Accord will make up for this, and see its model comfortably knocking rivals off their perches. A bold claim indeed – and on the evidence of this drive, not one we’re prepared to dismiss.

Rival: Mercedes C320 CDI Spacious, refined, upmarket – the latest C-Class is one of the best compact executive cars around. Its seven-speed automatic box and torquey diesel engine are great, although they come at a price.