When you get to my time of life, you don't tend to get as excited about birthdays as you do when you're a kid. But with my Honda Accord notching up more than 30,000 miles, I couldn't let the big three-O pass without marking the occasion. 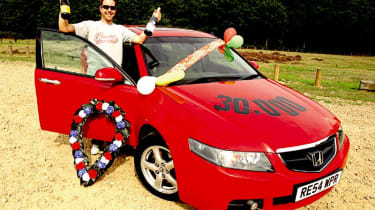 When you get to my time of life, you don't tend to get as excited about birthdays as you do when you're a kid. But with my Honda Accord notching up more than 30,000 miles, I couldn't let the big three-O pass without marking the occasion.

This wouldn't be much of an achievement over a few years' motoring, but I've managed to accrue the total in less than 12 months. Most of my working week is spent driving somewhere to photograph the latest motors. Motorways, A-roads, B-roads and even a few C-roads - you name it, the Accord and I have probably been there.

The good news is that the car has been faultless since the steering rack was replaced (issue 853) and it's still a rewarding drive. I continue to be impressed by the fuel economy (41.8mpg), even with a full load of my camera gear on board. And the thick rubber underside of the boot mat has proved useful, as I can spin it around to protect the Honda's carpet from some of my camera kit's plastic cases.

Since the last report, the tyres have finally worn out, but they lasted 24,000 miles. I've now got two new Michelins on the front, which cost a very reasonable £85.10, but environmental rules meant I had to pay £10 towards disposal of the old rubber, while fitting and balancing added £20.

Still, that looks like a bargain compared to the cost of the second service. This was performed after 25,000 miles at Lyndhill Honda in Chelmsford, Essex, at the same time as the tyres were replaced. The bill - excluding the rubber - was £457.69, which seemed pricey, especially given that the standard service cost is £144.90. Apparently, there were a few filters that needed replacing, and in fairness to Lyndhill it did tune the engine and adjust the tracking. The former has helped the Tourer run more quietly, while the latter corrected a slight pull to one side. Nevertheless, getting stung for two services in a year has hit the wallet harder than I'd like.

Previous reliability issues aside, I've been impressed by the Accord. It doesn't look like a large boxy estate, it doesn't drive like a big oil-burner and its refinement over long journeys makes the car a great all-rounder. My next motor will have to work hard to impress as much.

Given the mileage on Pete's Accord, you would have thought it was shared around the office a lot. But in reality, we've struggled to prise the keys out of his grip. However, I did drive it ona long road test and recently had it for the weekend, and it struck me how robust it still felt inside. This is a tribute to Honda's renowned reliability.Piers Ward, road tester