Our verdict on petrol version of new crossover, with CVT automatic gearbox 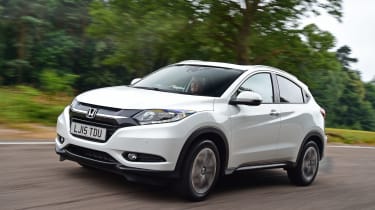 Having already tested the diesel HR-V, we were a bit underwhelmed by this 1.5-litre petrol model. The hindrance of the CVT gearbox and thrashy engine make it a rather unrefined and sluggish way of getting around. However, if you avoid this drivetrain combination, the HR-V is a solid all-rounder – yet it still lacks any real flair. The car handles and rides admirably, plus the sheer size of the boot and flexibility of the rear seating will appeal to growing families.

Honda has history when it comes to compact SUVs. It was back in 1999 when the boxy original Honda HR-V first arrived on the scene, and following almost a 10-year absence from the market, the Mk2 crossover has finally touched down in the UK.

Like its predecessor, the new HR-V is also based on a supermini – the Jazz – but Honda’s clever packaging means that while this is one of the smaller crossovers, it’s also one of the most spacious. It challenges the Nissan Juke on size yet is priced like the larger Qashqai, which it’s closer to in terms of practicality. The 470-litre boot actually trumps the Qashqai’s capacity by 40 litres. 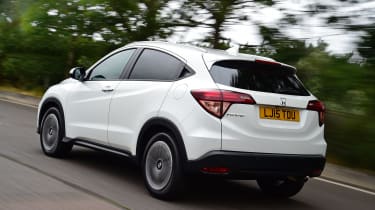 Prices kick off at just under £18,000 and rise to £24,945. There are four trim levels to choose from and two engines available – one petrol and one diesel – while front-wheel drive is the only option for now. The 128bhp 1.5-litre i-VTEC petrol tested here is an all-new engine. It’s paired with a six-speed manual box as standard, yet our test car is fitted with the £1,100 optional CVT auto.

As is the way with most CVT transmissions, you have to keep your foot pinned to the floor to make good progress, which brings a raucous and intrusive drone from the engine. The sprint from 0-62mph takes a sluggish 11.4 seconds, but once up to speed, the engine settles to a muted hum.

From there, the HR-V neither excels nor disappoints. The ride has a supple edge to it and takes imperfections in its stride, while the steering is light yet accurate and responsive overall. As the crossover isn’t as tall as some rivals, it has a lower centre of gravity and doesn’t lean excessively in corners. Instead, the good body control means that it always remains poised. Add in the lower driving position, and it can often feel like you’re driving a hatchback. 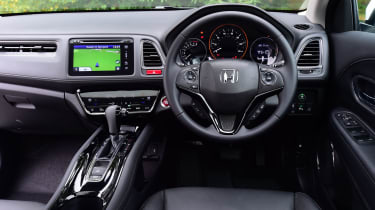 Honda’s intentions of crafting a touch-sensitive, minimalist cabin are obvious, but the execution isn’t quite up to class calibre. The seven-inch touchscreen – standard on top-spec EX models – is largely intuitive to use, but the Garmin sat-nav’s graphics look a little dated.

Rear legroom is good, with the Jazz’s clever folding Magic Seats fitted, yet headroom is tight due to the plunging roofline, so seating three adults is tough – especially with the elevated middle seat. You’d undoubtedly get fewer complaints from those in the back of a Qashqai.