The new flagship Honda HR-V Sport arrives with styling tweaks and 180bhp, but is it worth the extra money? 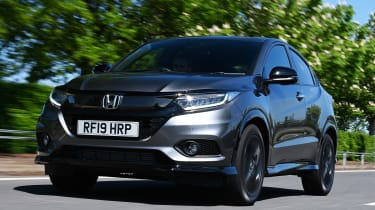 The Honda HR-V has built its reputation on being a relatively straightforward option, and the entry-level engine and trim options are still the ones that most crossover buyers should stick with. This new Sport won’t gel with the average buyer, although at least it lives up to its name with some hot hatch-like tendencies. As an overall package, though, the HR-V is showing its age.

You can’t escape SUVs these days. The industry is going mad for them, and while Honda was early to the trough with the arrival of the first-generation HR-V in 1999, the second-generation version has some catching up to do – we’ve already had an avalanche of new rivals step up since this car’s debut in 2016.

As such, it’s recently been given a mid-life refresh – albeit a minor one. Perhaps the most newsworthy change is the arrival of a new flagship model with a potent engine, intended to add some exciting garnish to the HR-V’s languid line-up. Step forward, the HR-V Sport.

It gets some subtle sporty styling tweaks, but that engine is the talking point. Honda has fitted the turbocharged 1.5-litre VTEC from the Civic, developing 180bhp and 240Nm of torque. Drive is sent strictly to the front wheels, and Honda claims 0-62mph in 7.8 seconds. 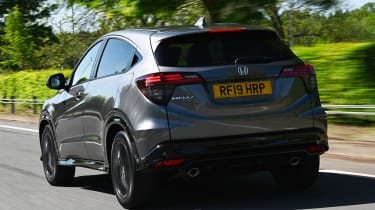 Those are numbers verging on hot supermini territory, and in practice the HR-V Sport doesn’t feel like a slouch. There’s definitely some performance to lean on here, and the engine pulls strongly from around 2,500rpm, tailing off a few hundred revs short of a 6,000rpm red line.

It’s quite bizarre to have such a feisty four-cylinder engine in what is a family crossover, and it’s linked to a sweet, mechanical six-speed manual action that really wouldn’t feel out of place in a good hot hatchback.

The steering is pleasant too. Granted, a bit more adjustability in the wheel would be nice, but it’s accurate and subtly weighted, and the HR-V Sport turns in nicely for what it actually is. Honda has equipped the Sport with new ‘Performance’ dampers, too, and while we’ll soon come on to what that means around town, on a B-road this is a crossover you can quickly build up some confidence in. Body control is kept nicely in check, as well.

So in some key ways the HR-V Sport does live up to its badge, but that doesn’t come without trade-offs. First of all, while the engine is powerful – and reasonably economical with its claimed 42.2 mpg figure – it is a bit uncouth. It’s rather noisy, and drones around the cabin under acceleration. Sixth-gear feels quite short too; at 70mph it’s turning over at nearly 3,000rpm. It’s not a relaxing car to settle down into for a long motorway stint.

We raised concerns with the ride when we drove the car in Portugal. But luckily, the trick dampers don’t upset things too much back here in the UK. There’s a firm edge, but its biggest flaw is its inconsistency; you’re never quite sure when it’ll make a mountain of a molehill.

As for the rest of the package it’s very much as you were. The HR-V’s mid-life update didn’t change much in the cabin, and the Sport doesn’t boast anything new of note either. The layout is practical and the materials are up to standard as well, but the tech is ageing badly. Despite liberal application of wine-red leather as standard the cabin lacks a wow factor. 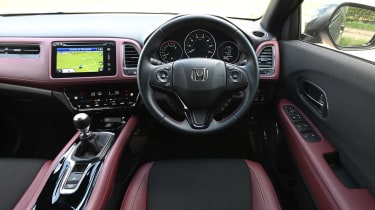 It feels like a dull and dark place to sit, and the central infotainment screen really lags behind what you’ll find as standard in many rivals – Apple CarPlay and Android Auto aren’t even on the options list. Space is good though and Honda’s clever ‘magic’ rear seats are standard.

However, if you’re not bothered about the HR-V’s extra poke, you can bag a more up-to-date rival just as well equipped as this, but for less cash. Honda’s SUV has built its reputation on being a sensible and straightforward option, and ultimately, the more sensible and straightforward engine options and trims are still the ones most crossover buyers should stick with.