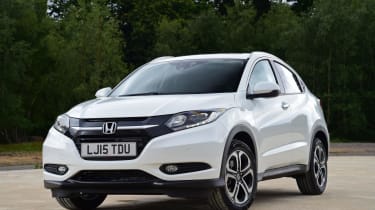 The Mexican-built Honda HR-V has a surprisingly low profile, largely because it’s overshadowed so much by its bigger and better-established brother, the CR-V. But this smart little SUV deserves a closer look, thanks to its spacious cabin, big boot and, less predictably, its towing abilities; it scooped the ‘up to 1,400kg’ crown in the 2016 Tow Car of the Year awards. Honda claims that the initials HR-V are short for Hi-rider Revolutionary Vehicle, which is definitely an overstatement. In fact, it doesn’t really offer anything that genuinely moves the game on, other than the ‘magic’ rear seats, the bases of which fold up like cinema chairs. However, if you’re looking for a high-riding compact family car that’s practical, should be painless to own, and is safe and well equipped, you should check it out.

Honda has never been afraid to innovate, but when the company launched its original HR-V crossover two decades ago, the car was maybe just that little bit too far ahead of the curve for its own good.

Fast forward 20 years and SUVs are all the rage, with particularly fierce competition in the small and mid-sized sectors. With the HR-V straddling these classes, in theory it’s all set to clean up. But you see surprisingly few on the road, so it’s clearly a little more exclusive than Honda would like. And that’s a shame, because we rather rate it. 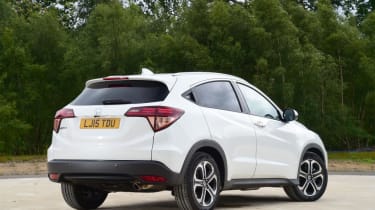 The second-generation HR-V reached showrooms on 1 September 2015, priced from £17,995 and available only with a five-door body. Buyers could choose between 1.5-litre petrol or 1.6-litre diesel engines, both with a six-speed manual gearbox as standard, and the former available with a CVT automatic transmission.

There were S, SE and EX trims, and in 2017 a limited-run Black Edition arrived. This was based on the SE, but it had black detailing, leather trim and 18-inch alloys.

The 1.5-litre petrol engine is smooth but doesn’t have enough torque, which is why the diesel is a better bet. This also offers stronger fuel economy and, because all HR-V diesels comply with Euro 6 emissions rules, you should avoid any future restrictions imposed on diesel engines.

You may be tempted by the CVT, but it’s worth noting that the manual transmission is much nicer to use in everyday life. 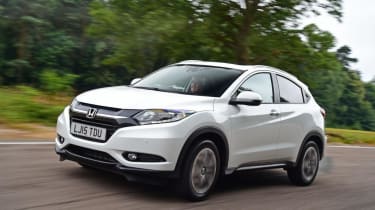 Alternatives to the Honda HR-V Mk2

At 4.3 metres long, the HR-V is bigger than the Renault Captur and Peugeot 2008, but shorter than the Ford Kuga and Nissan Qashqai. As a result, the Honda straddles the B and C-segment SUV sectors, so if the former are too small, the HR-V might be preferable to a car from the class above.

We love the Kuga, because it’s a great all-rounder, and the Renault and Peugeot offer very good value. If you’ve got a decent budget, take a look at the SEAT Ateca or Arona, as well as the Skoda Karoq. But, if cash is a little tighter, we suggest you consider the Skoda Yeti, which is another multi-talented family car.

Diamond-cut alloys are prone to pitting. Dealers have replaced many under warranty; make sure you look at them closely.

The navigation system can struggle to find satellites. A software update in 2017 should have fixed this, so don’t despair if the nav doesn’t work.

The tyre pressure monitoring system can flag up incorrect readings. Carrying your own gauge will help recognise false positives.

There’s no spare wheel of any kind supplied, but if you like to have extra reassurance, you can always buy a space saver. 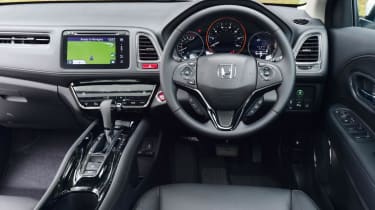 The HR-V’s dashboard and cabin are modern enough and generally solidly finished, but rather uninspiring, and the seats aren’t that comfy on a long drive. Rear space is good, as is versatility; the theatre-style ‘magic seat’ is something only Honda offers, and it’s a great feature. Boot space is good at 448 litres with the rear seats in use, and 1,026 litres when they’re folded.

Once an HR-V reaches its fourth service, it’s eligible for cut-price maintenance. Services alternate between minor and major, costing £165 and £270, while diesels are £20 extra each time, and CVTs £75 more. 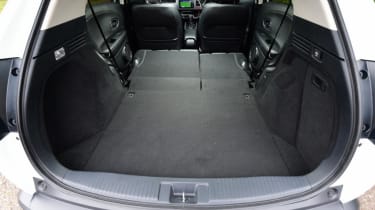 A service plan can also cut costs. For cars less than eight months old with no more than 8,000 miles, a plan covers servicing for up to five years or 62,500 miles.

There has been just one recall for the HR-V so far, in October 2018 and affecting 5,097 cars built up to April 2018. The problem centred on possible chafing of the wiring loom, potentially leading to a blown fuse.

This could cause the wipers not to work or the engine not to start. Honda either repaired or replaced the wiring harness, depending on the severity of any damage.

The HR-V has never made it into a Driver Power survey, but some owners have left reviews on carbuyer.co.uk. Opinions online are often polarised, and that’s true here. For every buyer in love with their HR-V there’s one who regrets their purchase due to poor build quality or disappointing reliability. The result is an average score of 3.3 out of five, compared with our rating of four.