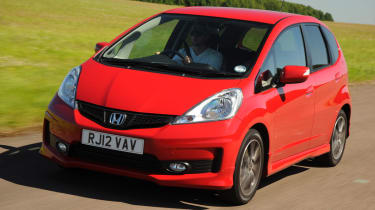 Unlike the style-focused MINI or Citroen DS3, the Honda Jazz is a supermini with a practical twist.

Compared with more stylish rivals, that offer a wide range of personalisation options, the Honda Jazz was created with pure practicality in mind. Thanks to a cleverly designed interior from Honda, the Jazz is the most family-friendly car in the supermini class.

However, with an all-new model of the Honda Jazz coming in 2015, buyers should be aware that the current model, despite its popularity, is beginning to show its age compared with newer competitors.

This is reflected in the fact that the Jazz has no three-door option, interior plastics are low-rent and Honda doesn't offer a diesel engine. Only 1.2-litre and 1.4-litre petrols are available, alongside the Jazz Hybrid. The Hybrid version improves the car's fuel economy slightly, but still trails the most efficient diesels in younger rivals.

The entry level 1.2 Honda Jazz is the manual-only S model, however an automatic CVT gearbox is available in the 1.4-litre ES Plus, ES-T Plus and range topping EX-T models. Si spec cars are the closest to a 'hot' version of the Jazz, but the upgrades are limited to the way the car looks as opposed to the way it drives - this car was not designed with sporting credentials in mind.

The standard equipment list for the Honda Jazz is fairly sparse, too - even a spare wheel is a cost-option. Fortunately, in order to make way for the new model coming in 2015, Honda dealers might be offering some good deals on the outgoing model.

Honda has made some great driver’s cars in the past such as the S2000 and the Civic Type-R. Unfortunately, the Jazz is not one of these due to slow, unresponsive steering and excessive body roll in corners.

On the plus side, however, driving the Honda Jazz in town is a breeze thanks to light controls and excellent all-round visibility. Honda's 99bhp 1.4-litre petrol engine is smooth and performs nicely, but it lacks that bit extra that many drivers would want. 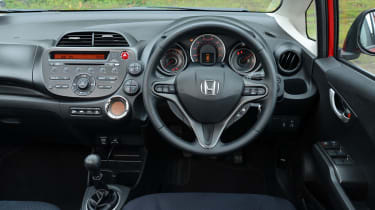 Overall, then, the Honda Jazz is just not up to the high standard of other superminis like the class-leading Ford Fiesta.

As with all other cars in the Honda range, the Jazz is fairly expensive when compared with established rivals. Factor in a lack of standard kit and the Jazz doesn't appear to be such great value.

The Jazz Hybrid version increases its combined cycle figure to 62.8mpg and reduces CO2 emissions to 104g/km, but when this is compared with the 88mpg combined economy of the Hyundai i20 1.1 CRDi Blue, the Jazz Hybrid doesn’t look like anything special.

On the plus side, like most Hondas, the Jazz's residuals are excellent - with the car retaining 41.6 per cent of its value after three years meaning depreciation shouldn't hurt it too much. An expensive pre-paid servicing pack costs around £700, but this takes care of scheduled maintenance for five years.

On the whole, the styling of the Honda Jazz is unlikely to attract attention like more distinctive rivals, or offer the sophistication of something like a Volkswagen Polo. However, the appeal of the Honda Jazz's design is its clever cabin and ergonomically-sound dashboard that features a neat button layout.

Furthermore, Honda has given the Jazz an excellent driving position, with leather seats available as an option to give the interior a further spruce-up.

The ES Plus model features a few styling additions to set it apart from other models such as body-coloured handles and alloy wheels, but it is worth noting that at the other end of the range, the entry level 1.2-litre S doesn't even get air conditioning or alloy wheels as standard.

What the Jazz lacks in visual appeal compared to its supermini rivals, it more than makes up for it when it comes to interior space and versatility.

Inside, the Honda Jazz offers plenty of head and leg room for passengers thanks to its slab-sided shape. The impressive 379-litre capacity even rivals mini MPVs such as the Hyundai ix20, Citroen C3 Picasso and Vauxhall Meriva. 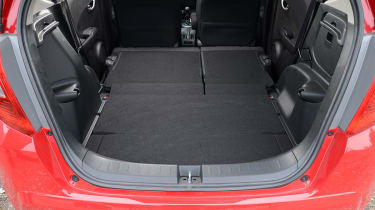 Honda has also maximised practicality by fitting the Jazz with a clever boot divider, but what really sets the Jazz apart from its rivals is the way the rear seats fold completely flat, meaning carrying large loads in the boot is particularly fuss-free.

Being a Honda, the Jazz is ultra reliable. This is reflected in its respectable 47th place finish out of 150 cars in our 2014 Driver Power survey. It means the Jazz should prove about as dependable as a supermini can get.

As well as being noted for its reliability, the Honda Jazz also comes with a good roster of safety kit. This includes six airbags, electronic stability control and active head restraints as standard. Thanks to this, it comes as no surprise that the Jazz was awarded a full five stars by Euro NCAP crash safety tests.