Unadulterated practicality has long been the strength of the Honda Jazz, the new one takes that to the next level 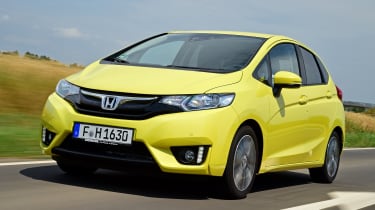 The new Honda Jazz isn’t the cheapest, fastest or cleanest supermini on sale, but it’s brilliantly packaged and is refreshingly honest in what it offers. The brilliant Magic Seats are a boon – and the wide, low load bay makes it even more practical than many cars in the class above. We’d stick with the mid-spec SE, though, as at more than £16,000 this EX starts to look quite expensive.

Honda has sold a whopping 5.5 million Jazz models worldwide since the innovative hatchback debuted in 2001. It currently accounts for 40 per cent of all Honda’s UK sales – and as many as 80 per cent of buyers have had one before. That’s a level of brand loyalty the likes of Volkswagen and Ford can only dream of.

But the new Jazz comes during a busy year for Honda. The CR-V has been given a new nine-speed gearbox, the first Civic Type Rs are already rolling off the production line, and an all-new HR-V will be in dealers next month.

So can this third-generation car still cut it in the super-competitive supermini segment? With a new Mazda2, facelifted VW Polo and refreshed Peugeot 208 already on sale and a host of new models on the way, it’s a tough time to launch a new car.

In terms of design, the new car is bags more desirable thanks to influence from the new HR-V and tweaked Civic. It gets the now-familiar family face, high window line and sharp body creases, as well as a practical and logically laid out interior. 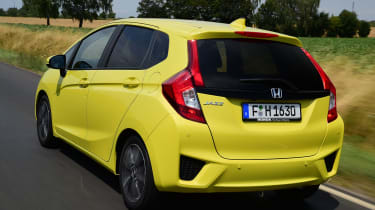 It’s big, too. The wheelbase is 30mm longer, and from bumper to bumper the new car has grown by a considerable 95mm. That means rear seat passengers enjoy 115mm more legroom and an additional 20mm around the shoulders. Knee room has swollen by 65mm – with Honda claiming that final figure is actually big enough to rival a Mercedes S-Class.

But that’s not all. The boot has grown, too. At 354 litres it’s 17 litres bigger than before, and shames rivals like the Kia Rio (288 litres) and Renault Clio (300 litres) for outright space. The lip is really low, and if you fold down the rear seats, you’ll reveal a cavernous 1,314-litre load bay – surpassed only by the gigantic Nissan Note (1,495 litres).

Like before, all Jazz models get Honda’s brilliant Magic Seat setup, allowing the rear bench to fold completely flat in a swift and easy-to-operate single motion. It’s really handy and makes the Jazz one of the most practical cars in its class. 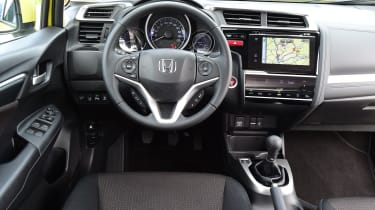 What’s more, the bases actually fold upwards, too, allowing you to slide larger items in the back rather than into the slightly narrower boot. The doors open nice and wide and there’s not too much intrusion from the rear wheel arch, either.

Up front, all but the base S model get the seven-inch touchscreen from the new HR-V, with Garmin sat-nav standard on the higher-spec Navi cars. The latter is a £610 option on SE and EX models, and while the graphics are a little archaic, it’s simple and straightforward to use.

There are loads of cubbies and storage areas dotted around the cabin. The door bins aren’t best-in-class, but there’s enough space for a water bottle and there are two further cupholders ahead of the gearlever – as well as one to the left (or right on UK cars) of the steering wheel. There’s a bin behind the handbrake, and a decent-sized glovebox for odds and ends. 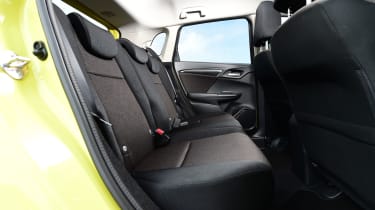 So that’s the practicality box ticked. How about engines? The old car was available with a choice of 1.2 and 1.4 petrols, as well as a CVT-equipped Hybrid. The new car starts afresh and offers only a 101bhp 1.3-litre i-VTEC petrol. Unlike rivals, it’s naturally aspirated – though Honda bosses did hint a small turbo could be on the cards.

Around town it’s nippy enough and the ride is noticeably more compliant than before. You’d never describe the Jazz as fast, but speed builds steadily and in a linear fashion – at least until higher in the rev band when the iconic VTEC system gives the engine a little extra boost.

The steering is direct and offers plenty of feel, and body control is good. It’s no sports car, but feels on a par with other comfort-biased cars in this class. The Ford Fiesta remains class champ if you want a fun to drive supermini, but the Jazz is an altogether more grown-up alternative. 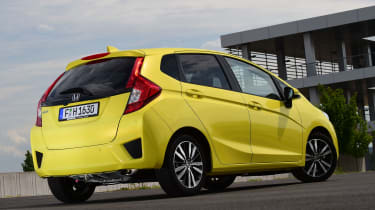 This characteristic is helped by the addition of a sixth gear on manual models. Gears one to five have lower ratios but the sixth cog has been lengthened for quieter cruising. Wind noise is nicely supressed thanks to added insulation in the wheelarches and behind the dash, and on the motorway it feels like a much bigger, more refined car than the outgoing model.

It’s reasonably economical too. Honda isn’t really interested in fleet buyers, so a sub-100g/km diesel isn’t a priority – neither is a super-pricey Hybrid. But the 1.3 offers a decent compromise, with 56.5mpg fuel economy and 116g/km CO2 emissions. Spec the larger 16-inch wheels on our EX-trim car and those numbers worsen to 55.4mpg and 120g/km respectively.

The CVT is marginally more economical, but the inferior driving characteristics mean we’d give it a miss unless you absolutely have to have an auto gearbox. Entry-level S models will emit just 106g/km – though that only represents a £10 annual saving for private buyers. 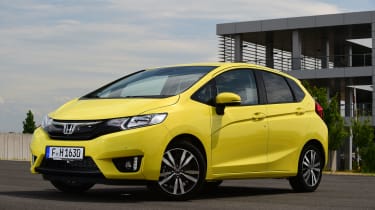 Bucking the trend for personalisation and optional extras, Honda wants to offer all the important bits of kit as standard. That means all cars get Bluetooth, DAB, cruise control and auto lights included – as well as air-con and electric windows front and rear. Upgrade from the basic S to mid-spec SE and you’ll benefit from alloy wheels, a seven-inch touchscreen and all-round parking sensors. All the core safety systems are included on the SE, too, from forward collision warning, to lane departure warning and traffic sign recognition.

It’s the SE we’d go for, though the flagship EX adds all the goodies – including 16-inch alloys, a rear view camera, climate control and a leather steering wheel. As mentioned, sat-nav is a £610 option.

At the start of the year Honda had one of the oldest core product ranges in the UK. By the end of next month – thanks to the addition of the Jazz and no less than four other new or revised models – it’ll be boast the youngest. As we said, it’s rather a busy year for the brand, and the new Jazz shows it's finally pointing in all the right directions.