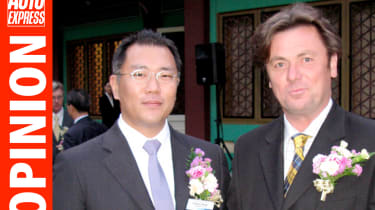 You have to feel a bit sorry for poor ol’ Euisun Chung at the minute. OK, OK, he’s not that poor (personal wealth around $3billion) and he’s comparatively young (in his forties). But he’s a bit like Prince Charles in that, although he’s chugging along quite comfortably, he can’t yet inherit the top job, full responsibility, plus mega-salary package until his much-loved elderly parent abdicates or dies. You see, Euisun's dad is Mong-Koo Chung, who’s the closest thing that South Korea’s got to a king.

The 81-year old is the hard-as-nails chairman and CEO of Hyundai-Kia-Genesis and has even more billions than his boy, who’s merely the group’s chief vice-chairman. This is despite the fact that the heir apparent has, in effect, just taken over the day-to-day running of the colossal organisation, while his old man spends more (but not all) days at home.

Yet even before Euisun is crowned and allowed to sit formally on the Hyundai-Kia-Genesis throne, he’s making waves, doing a great job by bravely taking the group into areas it hasn’t previously occupied. Only last month he plonked almost $100million (for starters) into the coffers of Croatian hypercar manufacturer Rimac, because he correctly concludes it usually takes decades to turn a car brand from zero to hero. Although he believes he’s just about done that with Hyundai and Kia (less so with Genesis), it’s wiser to simply buy into an existing hypercar brand.

Chung Jr knows better than anyone that he must soon possess a premium 4x4/SUV line-up(s). This explains his alleged interest in buying financially troubled JLR, which his rapidly expanding clan could easily afford to adopt and nurture.

More certain, though, is that Euisun will not enter into a mega-merger with a giant corporation such as Ford or Mercedes, who his dad and other family members had unsatisfactory dealings with in the past. The days of Hyundai-Kia needing help from supposedly superior US and German-based mainstream car makers are gone.

But he’s willing to and is actively recruiting the world’s top car designers from Europe and elsewhere. (Soon to ‘retire’ Ian Callum CBE of Jaguar, please note) And, in recent days, Chung Jr has done an extraordinary deal with an Israeli company, which paves the way for ambulance services and other health professionals to receive the condition of drivers and passengers just seconds after they’ve been involved in accidents on the road.

Away from cars but still within his remit, Euisun Chung has set up a secret building for extreme blue-sky thinking from his in-house creatives. Rumour has it he fancies moving further into the communications industry to challenge arch-rival Samsung, and last week he vowed to have a high-speed hydrogen train up and running by 2020. Honest.

If Chung Jr is doing all this genuinely game-changing stuff before he’s crowned king of the Hyundai-Kia-Genesis castle, imagine how ridiculously free-thinking and productive he’ll be when he is permitted to sit on the throne and wear that crown. The most significant and powerful car bloke of the next decade or two? Probably.

If you enjoyed this opinion piece then make sure to head to our opinions page to read more views from the Auto Express team...