Hyundai has confirmed that prices for its all-new i10 city car will start from £12,495, rising to £15,495 for the most-powerful, range-topping Premium model. The third-generation model will go on sale in the UK in January 2020, where it will rival the Volkswagen up!, Citroen C1 and Toyota Aygo.

Hyundai also boasts that the new i10 will offer one of the most comprehensive safety equipment packages in the city car class. As standard, buyers get autonomous emergency braking, forward collision warning, lane-keeping assist, hill-start assist, a driver attention alert sensor and a tyre pressure monitoring system. 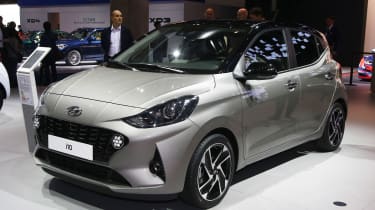 Mid-range SE Connect models are priced from £13,495. Upgrades over the base-model include 15-inch alloy wheels, a rear-view camera, a four-speaker stereo system and an eight-inch infotainment system with voice recognition and support for Apple CarPlay and Android Auto.

Buyers of the i10 Premium can also choose from a range of optional extras, including Hyundai’s Tech Pack (£1,000) which adds a wireless smartphone charger, satellite navigation and an intelligent speed limit warning system. Two tone paint can be specified for an extra £500, while metallic or pearlescent paint costs an additional £550.

Two petrol engines are available: a 1.0-litre three-cylinder or an 1.2-litre four-cylinder. The former unit is available on all models in the range and produces 66bhp and 96Nm of torque. It has respective economy and emissions figures of 56.5mpg and 101g/km of CO2 under the WLTP test cycle.

The more powerful 1.20-litre unit is only available on SE Connect models and above, where it carries a premium of £500. The engine produces 83bhp and 118Nm of torque, offering claimed economy and emissions figures of 55.4mpg and 105g/km of CO2 respectively. Both engines can also be specced with either a five-speed manual or a five-speed automatic.

The market for entry-level city runabouts has shrunk rapidly in recent months, with the Ford Ka+, Renault Twingo and Suzuki Celerio all being axed from UK showrooms. But Hyundai shows no sign of leaving the segment any time soon, with the recent launch of what it’s calling the most hi-tech city car ever. 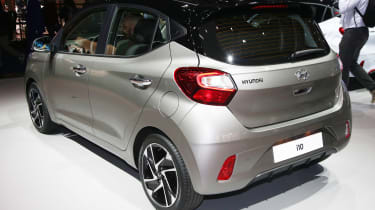 Hyundai’s Volkswagen up! rival is completely new from top to bottom. It sits 20mm lower and 20mm wider than the second-generation i10, while elements like the cascading grille, complete with slimmer headlights and LED spot lamps on higher-specced models, give it a more upmarket look.

The newcomer is just 5mm longer than its predecessor, but its wheelbase has grown by 40mm, pushing the wheels further out towards each corner. Hyundai says this not only gives its smallest model a sportier look, but improves cabin space, too. Rear legroom has increased to a point where Hyundai claims that four adults will find more than enough space inside – impressive for a car in this class. At a push, there’s room for a fifth occupant as well.

At 252 litres, the boot is exactly the same size as the old model’s, and it’s a class-leading figure. A false floor can be raised up to create a flat loading area when the seats are folded down, or lowered to make the most of the space available. The new dashboard design carries over certain elements from the old model, such as the raised position of the gear lever. Others, like the slim central air vents, are inspired by the Kona crossover. 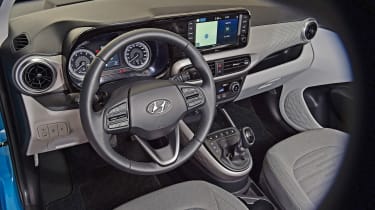 However, the most significant update for the i10 comes in the shape of the infotainment system. The housing for the new eight-inch touchscreen display, which is largely similar to the unit used in the i30, flows in one continuous sweep towards the instrument panel, and features physical shortcut keys around the outside.

The system is linked to Hyundai’s Bluelink telematics app, which allows i10 drivers to use their smartphone to search for parking spaces, fuel stations and points of interest, and then send the results directly to the car’s navigation system. In a class where rivals such as the up! offer little more than a smartphone cradle, a full-size infotainment system with Apple CarPlay and Android Auto gives the i10 an edge.

Finally, while there aren’t any immediate plans for an all-electric version of the i10, when pressed, Hyundai insiders wouldn’t rule out the prospect for the future.

Do you like the look of the all-new Hyundai i10? Let us know in the comments section below… 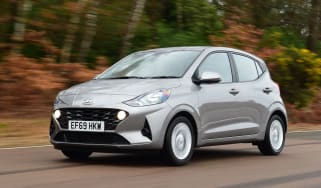 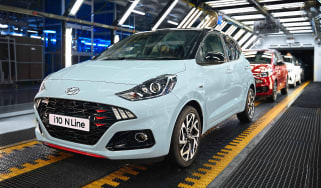